Greene County is a county in the U.S. state of Pennsylvania. As of the 2010 census, the population was 38,686. Its county seat is Waynesburg. Greene County was created on February 9, 1796, from part of Washington County and named for General Nathanael Greene.

Greene County is part of the Pittsburgh media market. It is in the area of southwestern Pennsylvania that was claimed by Virginia, the District of West Augusta.

There were 14,724 households, out of which 29.3 percent had children under the age of 18 living with them, 51.5 percent were married couples living together, 10.9 percent had a female householder with no husband present, and 32.3 percent were non-families. 27.0 percent of all households were made up of individuals, and 11.7 percent had someone living alone who was 65 years of age or older. The average household size was 2.42 and the average family size was 2.91. 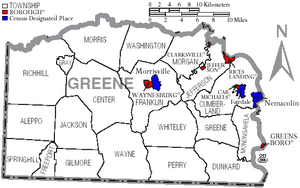 Under Pennsylvania law, there are four types of incorporated municipalities: cities, boroughs, townships, and, in at most two cases, towns. The following boroughs and townships are located in Greene County:

The population ranking of the following table is based on the 2010 census of Greene County.

The Meadow Ridge office park has served the county since the early 2000s. 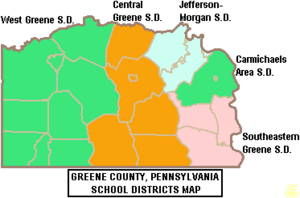 Some schools within the five above districts include:

All content from Kiddle encyclopedia articles (including the article images and facts) can be freely used under Attribution-ShareAlike license, unless stated otherwise. Cite this article:
Greene County, Pennsylvania Facts for Kids. Kiddle Encyclopedia.