Bobtown is an unincorporated coal town and census-designated place (CDP) in Greene County, Pennsylvania, United States. As of the 2010 census it had a population of 757. 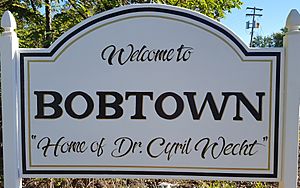 Bobtown was founded by the Shannopin Coal Co in the 1920s to provide housing for miners who worked in the company's mine which was located nearby. The town is named for Robert "Bob" Mapel, who was also the founder of nearby Mapletown.

The community is in southeastern Greene County near the center of Dunkard Township, on a plateau 350 feet (110 m) above Dunkard Creek. It is 3.5 miles (5.6 km) west of the mouth of Dunkard Creek at the Monongahela River and 19 miles (31 km) southeast of Waynesburg, the Greene County seat. According to the United States Census Bureau, the CDP has a total area of 0.63 square miles (1.64 km2), all of it land.

There were 322 households, out of which 23.3% had children under the age of 18 living with them, 50.3% were married couples living together, 10.6% had a female householder with no husband present, and 33.5% were non-families. 28.9% of all households were made up of individuals, and 28.9% had someone living alone who was 65 years of age or older. The average household size was 2.41 and the average family size was 2.95. 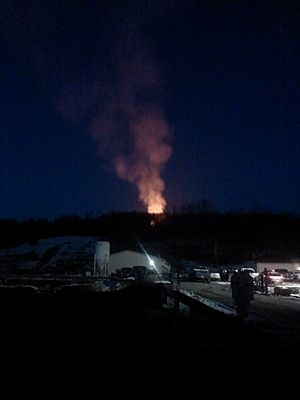 On February 11, 2014, Chevron's Lanco 7H well caught fire and burned for several days. The well is located about one mile west of Bobtown on Bald Hill Church Road. The explosion killed contractor Ian McKee, a field service technician for Cameron International, and slightly injured another worker. Chevron representatives distributed pizza coupons to residents as compensation for traffic caused by emergency responders and press. The pizza issue gained national attention from various media outlets, including Comedy Central's The Daily Show which interviewed the owners of Bobtown Pizza.

Bobtown is served by Southeastern Greene School District and is the location of Bobtown Elementary School.

Cable television and cable Internet are provided by Atlantic Broadband. Landline telephone and DSL services are offered by Windstream Communications.

Trash pickup in the Bobtown area is provided by Preferable Sanitation.

All content from Kiddle encyclopedia articles (including the article images and facts) can be freely used under Attribution-ShareAlike license, unless stated otherwise. Cite this article:
Bobtown, Pennsylvania Facts for Kids. Kiddle Encyclopedia.