Nemacolin is a census-designated place (CDP) in Greene County, Pennsylvania, United States. It was founded as a company town around the workings of a Youngstown Sheet and Tube Company owned and operated coal mine in 1917. The name reflects a noted Amerindian ally Chief Nemacolin, who showed the Virginia and Pennsylvania settlers how to cross the successive Allegheny barrier ridges via the Cumberland Narrows and the Nemacolin Trail—which Braddock's Expedition widened into a wagon road through the mountains. The population of the CDP was 937 at the 2010 census. 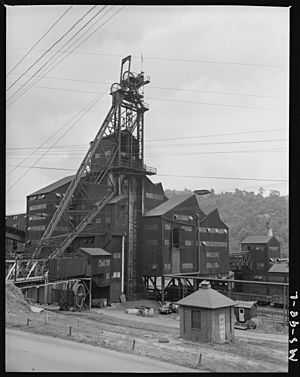 The land upriver from Brownsville along the eastern border of Greene County was acquired by the Youngstown Sheet and Tube Co. (YS&T) which planned, zoned, populated, and built the community, complete with a movie theater, tennis courts, amusement hall (in the fashion of the times in blue-collar company towns, part pool hall, part beer garden), and swimming pool near the borough of Carmichaels. At one time, Youngstown Sheet and Tube was the largest steel company in the nation. Establishing the town well after the United Mine Workers flexed their muscles in the strikes of the 1890s–1900s and after its riot troubles in Youngstown in 1916, it is also likely the company had a hand in establishing the local school and one or more churches and likely issued invitations and recruited the medical practitioners operating the various health clinics.

The mine, established outside the town, was one of many large mines atop the Pittsburgh Coal Seam on the west bank of the Monongahela River. It was operated as a subsidiary under the Buckeye Coal Company and grew and benefited as being directly on the railroad route running upriver (south) to West Virginia and was able to load both river coal barges and freight trains with its output. It is thought by some to have been the largest coal mine in the United States in 1919, and was rated at being the second most productive in Greene County in the 1940s war years. The mine operated nearly 70 years, shutting down production in 1986, and was sealed (safed) 2–3 years later.

There were 401 households, out of which 34.9% had children under the age of 18 living with them, 42.6% were married couples living together, 17.5% had a female householder with no husband present, and 32.4% were non-families. 28.2% of all households were made up of individuals, and 16.0% had someone living alone who was 65 years of age or older. The average household size was 2.58 and the average family size was 3.13.

All content from Kiddle encyclopedia articles (including the article images and facts) can be freely used under Attribution-ShareAlike license, unless stated otherwise. Cite this article:
Nemacolin, Pennsylvania Facts for Kids. Kiddle Encyclopedia.