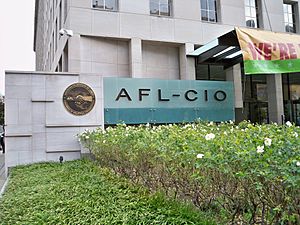 The headquarters of the AFL-CIO, near the White House in Washington DC

The American Federation of Labor and Congress of Industrial Organizations, called the AFL-CIO, is a group of labor unions in the United States and Canada. There are 54 national different unions in the group, and they speak for over 10 million workers. It was started in 1955, when the American Federation of Labor and the Congress of Industrial Organizations joined after a long argument. From 1955 to 2005, almost all union workers in the U.S. were part of the AFL-CIO. However, in 2005, some large unions (like the Teamsters) left the AFL-CIO.

All content from Kiddle encyclopedia articles (including the article images and facts) can be freely used under Attribution-ShareAlike license, unless stated otherwise. Cite this article:
AFL-CIO Facts for Kids. Kiddle Encyclopedia.