Kids Encyclopedia Facts
Not to be confused with Bar Harbor, Maine. 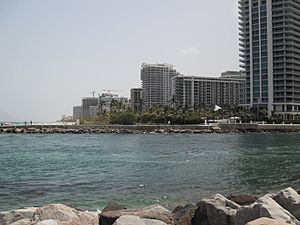 View on Bal Harbour from the north across Baker's Haulover Inlet

Bal Harbour is a village in Miami-Dade County, Florida, United States. The population was 2,513 at the 2010 US Census.

Since the 1920s, the Detroit-based Miami Beach Heights Corporation – headed by industrialists Robert C. Graham, Walter O. Briggs, and Carl G. Fisher – owned 245 acres (0.99 km2) of undeveloped, partially swampy land that stretched from the bay to the Atlantic. Mr. Graham assumed the duties as the developer for Bal Harbour. In the 1930s, city planners Harland Bartholomew & Associates were called in to design the Village. The company made several plans and they were submitted to the Miami Beach Heights for review.

The original name chosen for Bal Harbour was Bay Harbour. However, the planning committee didn't think that was appropriate for a city that was on the beach. A name was invented to encompass a village that ran from the bay to the Atlantic Ocean. The "b" was taken from the word bay and the "a" and "l" were taken from the name Atlantic. Hence the word "Bal" was created.

In 1940, World War II began and the plans were put on hold. As a goodwill gesture to the government, Robert C. Graham rented the land to the United States Air Corps for $1 per year. The Air Corps used this land to train their soldiers and established a Prisoner of War camp. The ocean front area was used as a rifle range and the barracks were set up on the west side of Collins Avenue. The camp for prisoners was located where the Bal Harbour Shops are presently.

In 1945, the war was over in both Germany and Japan. The Air Corps left the barracks buildings as a thank you to the owners of the property. These barracks were converted into apartment homes by Mr. Graham in 1946.

In order to incorporate a city in 1946, there had to be at least 25 male registered voters residing in the area. Mr. Graham had twenty five families move into the apartment homes that he had converted in order to qualify the Village for incorporation. He then hired Willard Webb, a Miami Beach tax assessor, to draft a charter for the Village. After the charter was completed, the Village of Bal Harbour was incorporated on August 14, 1946, by Mr. Graham and 25 male registered voters. The Village was operated under the city manager form of government.

Swampland was filled, sea walls were constructed and the yacht basin was created. Contracts were signed for the sewer systems, water pumping stations and utilities. Bal Harbour was the first planned community in Florida to have its utilities placed underground. Developers set guidelines for the development of the beachfront and the residential areas. Collins Avenue was paved into four lanes with a landscaped median and later widened to the present day six lanes. Village plans indicated that ocean front property was to be 200 feet (61 m) deep and lots approached $100,000. Lots in the residential area were about 1,800 square feet (170 m2) and cost from $6,500 to $20,000.

Bal Harbour Village was re-incorporated by a special act of the 1947 Florida Legislature and its own charter was issued June 16. This new charter supplemented the original incorporation under the General Laws of Florida. In accordance with the new charter, an election to select five to serve on the Council was held June 30. The Council elected were: Edward L. Bonneau, Robert C. Graham, Jr., Glenn E. Massnick, George Whittaker, and Judge Julien Southerland. Judge Southerland was chosen as mayor. Willard Webb, who had been acting manager since the first organization, was appointed as Village Manager. Mary Wetterer was named Village Clerk and Herold Dickey was appointed Chief of Police.

In 1947, the Church by the Sea was built. In 1948, the Beach Club was built. Its restaurant was operated by Howard Johnson's. In 1949, a new bridge was started over Baker Haulover.

In 1956, the current Village Hall was built. In 1956, the Hotel Americana was built. It became the Sheraton Hotel in 1980. It was imploded on November 18, 2007 to build a set of condos and a luxury aparthotel as the St. Regis. In 1959, Bal Harbour's beach was renovated due to severe erosion.

In 1965, the Bal Harbour Shops was built by the Whitman family. Stanley Whitman was one of the incorporators who lived with his family in the barrack apartments. In 1971, Bal Harbour's beach started a major renourishment project. In 1984, the residents of an exclusive neighborhood in Bal Harbour were successfully sued to remove the clause preventing Jews and blacks from owning property there.

In 2015, the it was reported in the press that "the Bal Harbour Police and the Glades County Sheriff set up a giant money laundering scheme, but it all fell apart when federal investigators and the Miami Herald found strange things going on."

A channel between the north end of Biscayne Bay and the Atlantic ocean runs across the northern end of Bal Harbour.

All content from Kiddle encyclopedia articles (including the article images and facts) can be freely used under Attribution-ShareAlike license, unless stated otherwise. Cite this article:
Bal Harbour, Florida Facts for Kids. Kiddle Encyclopedia.