Kids Encyclopedia Facts
This page is about the Miami Beach thoroughfare. For the Dublin regional road, see R103 road (Ireland). 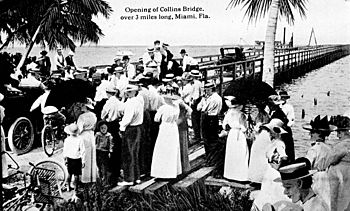 Collins Avenue is home to many historic Art Deco hotels, and several nightclubs to the north.

North of 41st Street this boulevard lies between the Atlantic Ocean and the Indian Creek, lined by palm trees, and famous hotels from the 1950s and 1960s such as the Eden Roc and the Morris Lapidus-designed Fontainebleau Hotel, built in the curvy, flamboyant Neo-baroque fashion that defined the 1950s 'Miami Beach' resort hotel style.

All content from Kiddle encyclopedia articles (including the article images and facts) can be freely used under Attribution-ShareAlike license, unless stated otherwise. Cite this article:
Collins Avenue Facts for Kids. Kiddle Encyclopedia.