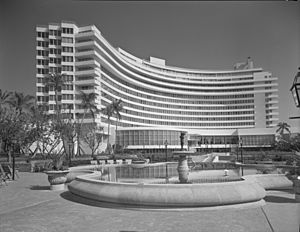 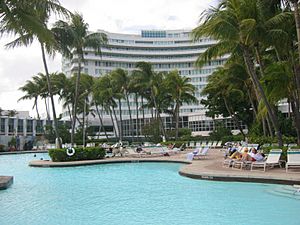 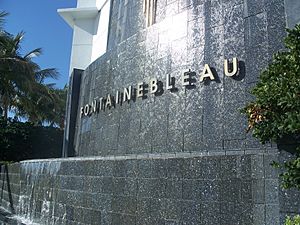 The hotel was built by hotelier Ben Novack on the grounds of the former Harvey Firestone estate. Novack owned and operated the hotel until its bankruptcy in 1977.

The Fontainebleau is noted for its victory in the landmark 1959 Florida District Courts of Appeal decision, Fontainebleau Hotel Corp. v. Forty-Five Twenty-Five, Inc. 114 So. 2d 357, in which the Fontainebleau Hotel successfully appealed an injunction by the neighboring Eden Roc Hotel to prevent construction of an expansion that blocked sunlight to the Eden Roc's swimming pool. The Court rejected the Eden Roc's claim to an easement allowing sunlight, in favor of affirming the Fontainebleau's vertical property rights to build on its land. It stated that the "ancient lights" doctrine had been unanimously repudiated in the United States.

In 1978, Stephen Muss bought the Fontainebleau Hotel for $27 million, thus rescuing it from bankruptcy. He injected an additional $100 million into the hotel for improvements and hired the Hilton company to manage it. In 2005, the Muss Organization sold the Fontainebleau to Turnberry Associates for $165 million.

The hotel closed a large part of its property in 2006, though one building remained open to hotel guests, and the furnishings were available for sale. The expanded hotel and its new condominium buildings re-opened in November 2008.

On December 22, 2008, the Fontainebleau was added to the National Register of Historic Places. 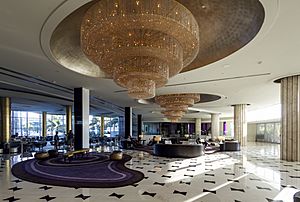 Fontainebleau's grand re-opening on November 18, 2008 marked the end of a two-year, $1 billion transformation. Special care was taken to preserve many of the original design elements, including the "Staircase to Nowhere" (formally called the "floating staircase"). The hotel's elaborate re-opening celebrations included hosting the annual Victoria's Secret fashion show.

Restaurants and nightclubs in the complex include:

All content from Kiddle encyclopedia articles (including the article images and facts) can be freely used under Attribution-ShareAlike license, unless stated otherwise. Cite this article:
Fontainebleau Miami Beach Facts for Kids. Kiddle Encyclopedia.