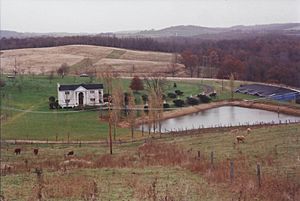 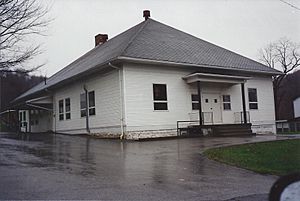 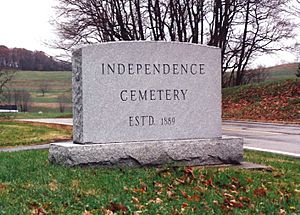 Entrance to Independence Cemetery near Avella

Avella is a census-designated place in Independence Township, Washington County, Pennsylvania, United States. As of the 2010 census the population was 804 residents. It is located at 40.27° north & 80.45° west.

The ancient history of the area includes some of North America's earliest inhabitants. The Meadowcroft Rockshelter is a prehistoric shelter found below a rock outcropping that is believed to have provided shelter for a succession of early foragers as far back as 16,000 years. The area also was the site of Eastern Woodland Indians communities some 400 years ago. Today a National Historic Landmark includes a historic interactive display that provides a view of life for early Woodland Indians, as well as 19th Century rural American life.

Avella's early history included American frontiersmen, grist mills and refuge forts during the 18th century, when the area was part of the western frontier. It remains the site of a significant farming community. However, it began to grow after the arrival of the railroad in the early 20th century (the last railroad tunnel was completed in 1903 and served the Wabash Railroad.) Completion of the railroad enabled coal mining companies to open numerous mines, making the Avella/Burgettstown area one of the world’s most important bituminous coal mining regions.

The mining and railroad opportunities attracted many immigrants in the early 20th century, principally southern and eastern Europeans, and the area grew greatly in size and importance in the first third of the 20th century. However, it began a gradual decline as the local coal seams began to give out and the demand for and price of coal dropped. The population declined as the coal mines closed and families moved away looking for other employment opportunities.

Coal mining was a hard life for the miners and their families. Several books were written about the area, including 'I went to Pit College" (as in coal pit) and "Icon of Spring." "Holes in the Hills," the most recent, was published in 2005. It deals with the Cliftonville Riot of 1922. The "riot" was an attempt by approximately 400 area miners to close down a non-union mine nearby in Brooke County, West Virginia. It resulted in the death of the sheriff of Brooke County and the imprisonment of many miners. Eight miners were confirmed dead at the scene, but an untold number were buried in the woods, in unmarked graves, during the retreat by their comrades.

After the mining era the population declined, and the area became a “bedroom community," where people live in one place but work in another, principally the Pittsburgh area and the Ohio Valley of West Virginia and southeastern Ohio. To preserve local history and genealogy, local Historian Alvin D. (A.D.) White collected vast amounts of information and wrote many books about the northern Washington County area, including Avella. The A.D. White Preservation Society purchased the vacated early-20th century train station, one of the last of its type, and with government grants has restored it into its headquarters and research center.

All content from Kiddle encyclopedia articles (including the article images and facts) can be freely used under Attribution-ShareAlike license, unless stated otherwise. Cite this article:
Avella, Pennsylvania Facts for Kids. Kiddle Encyclopedia.