Peru is a city in, and the county seat of, Miami County, Indiana, United States. The population was 11,417 at the 2010 census, making it the most populous city in Miami County. Peru is located along the Wabash River, which divides the city in two.

On August 18, 1827, Joseph Holman bought land near the confluence of the Mississinewa and Wabash Rivers from Jean Baptiste "Pechewa" (Wildcat) Drouet de Richardville, the chief of the Miami Indians. The sale was approved on March 3, 1828 by President John Quincy Adams. On March 12, 1829, Holman had the land surveyed and laid out into the town of Miamisport.

Peru was founded in 1834 by William N. Hood, who had bought 210 acres of land from Miamisport's founder Joseph Holman five years earlier. By 1835, court was being held in Peru rather than Miamisport, and the name "Miamisport" quietly disappeared as Peru became the dominant community in the area. Frances Slocum was reunited with members of her family near Peru in 1837, after nearly sixty years of captivity among Native Americans.

Early in the 20th century, Peru was home to a pioneering automobile maker, Model Automobile Company; like many other early automobile manufacturers, Model did not survive.

In 1913, Peru suffered a massive flood, the worst of its time. Between March 24 and March 27, 6 inches (150 mm) of rain fell on Peru, and sent water from the Wabash and Mississinewa rivers rushing down its streets at speeds of 20 miles per hour (32 km/h), destroying everything in its path. Before the flood of 1913, Peru was a busy town, full of activity and jobs, with 15,000 inhabitants, 100 factories, a trolley service, railroads, a new hospital (Duke's), a circus (which employed 1000 people on the road), and a new concrete bridge (largest of its kind in the world at the time). The total loss for Peru was estimated at $3,000,000 (1913 figures). Many people died, as well as many of the circus animals.

On June 23, 1972, Martin J. McNally hijacked American Airlines Flight 119 while in flight from St. Louis to Tulsa. After receiving a ransom of $502,500 he jumped out of the back of the Boeing 727 in what was the ninth copycat hijacking in the style of D. B. Cooper. The entire ransom as well as a weapon were found near Peru. A fingerprint led to his arrest. The money was found in a 45-pound (20 kg) sealed canvas mail bag by local farmer Lowell Elliott while he was working in his soybean field. Another farmer, Ronald Miller, discovered a Spitfire submachine gun in his corn field when a blade hit it while applying liquid nitrogen fertilizer.

The movie Little Big Top, which starred Sid Haig, was shot and directed in the town of Peru. Scenes show the famous drive up to the "Mr. Weenie" restaurant and the Circus building. 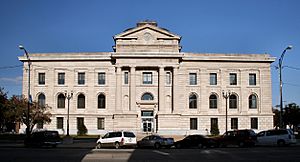 There were 4,791 households of which 30.8% had children under the age of 18 living with them, 42.0% were married couples living together, 14.9% had a female householder with no husband present, 4.9% had a male householder with no wife present, and 38.2% were non-families. 33.0% of all households were made up of individuals and 13.5% had someone living alone who was 65 years of age or older. The average household size was 2.36 and the average family size was 2.96.

There were 5,410 households out of which 30.9% had children under the age of 18 living with them, 45.1% were married couples living together, 13.7% had a female householder with no husband present, and 37.2% were non-families. 32.8% of all households were made up of individuals and 14.3% had someone living alone who was 65 years of age or older. The average household size was 2.34 and the average family size was 2.97.

"Circus Capital of the World"

Peru was the winter headquarters for several famous circuses, including Ringling Brothers, Hagenbeck-Wallace, Buffalo Bill's Wild West Show, and others. The International Circus Hall of Fame is located in Peru. Annually during the third week of July, the Peru Amateur Circus holds performances for the whole week, ending with the Circus City Festival and Parade. All of the performers are amateurs, ranging in age from 7 to 21 years. Peru is also the home of the world's only remaining manufacturer of steam calliopes.

Mariya Rasputina, daughter of Grigori Rasputin, was mauled by a bear in Peru while working for the Ringling Brothers Circus, but survived.

All content from Kiddle encyclopedia articles (including the article images and facts) can be freely used under Attribution-ShareAlike license, unless stated otherwise. Cite this article:
Peru, Indiana Facts for Kids. Kiddle Encyclopedia.