Wabash is a city in Noble Township, Wabash County, in the U.S. state of Indiana. The population was 10,666 at the 2010 census. The city is the county seat of Wabash County.

Wabash is notable as claiming to be the first electrically lighted city in the world, which was inaugurated on March 31, 1880. However, closer inspection of the reference shows only the court house grounds were lighted. It is also home to the historic Eagles Theatre, Paradise Spring Treaty Grounds (1826), the Wabash and Erie Canal, Presbyterian Church (1880), and Disciples of Christ Christian Church (1865).

The name Wabash derives from a Miami-Illinois term for "water over white stones." The Wabash post office has been in operation since 1839. The Miami name reflected the clarity of the river in Huntington County, Indiana where the river bottom is limestone.

On March 31, 1880, four 3,000-candle power lamps were suspended from the top of the courthouse. Two telegraph wires ran from the lamps to the courthouse basement, where they were connected to a threshing machine to provide power Wabash used a new type of carbon arc light invented by Charles Brush in 1870. 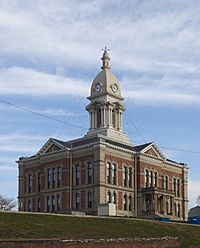 The town has a lending library, the Wabash Carnegie Public Library.

All content from Kiddle encyclopedia articles (including the article images and facts) can be freely used under Attribution-ShareAlike license, unless stated otherwise. Cite this article:
Wabash, Indiana Facts for Kids. Kiddle Encyclopedia.