Hamilton County is a county located in the U.S. state of Indiana. Census 2010 recorded a population of 274,569. The county seat is Noblesville.

Hamilton County is included in the Indianapolis-Carmel-Anderson, IN Metropolitan Statistical Area

Hamilton County’s roots are in agriculture. However, after World War II, Indianapolis grew north and towns in the southern part of the county developed as suburbs. Many farm fields have been replaced by both residential and commercial development. The northern portion of the county remains largely agricultural. Today, the county is one of the fastest-growing counties in the United States. According to 2007 estimates by the U.S. Census, the county’s population increased from an estimated 182,740 in 2000 to 261,661 in 2007, making it the fastest-growing county in Indiana out of 92. Recently, Hamilton County surpassed St. Joseph County in population, making it the fourth most populous in the state.

Geist and Morse reservoirs are two man-made lakes in Hamilton County that offer residents and visitors recreational opportunities such as boating, fishing, and waterfront living.

In June 2008, Hamilton County was named America’s Best Place to Raise a Family by Forbes.com due to its strong economy, affordable living, top-ranked schools, and close proximity to Indianapolis. The city of Carmel in southwestern Hamilton County was designated CNN Money's top place to live in 2013.

The land containing Hamilton County was brought into the possession of the United States by the Treaty of St. Mary's in 1818. William Conner was the first white settler in the county. In the summer of 1822, after realizing there were enough settlers in the area, Conner and other settlers applied to the Indiana Legislature for a charter authorizing them to become a separate and independent county under Indiana law. The application was presented to the Legislature at the 1822-23 session and the act was passed and approved by the governor on January 8, 1823. The act took effect on the first Monday in April (April 7), 1823. The County Commissioners first met on May 5, 1823, at the house of William Conner. Conner’s house would also serve as the County Circuit Court. The county was named after Alexander Hamilton, the first secretary of the treasury.

In recent years, average temperatures in Noblesville have ranged from a low of 17 °F (−8 °C) in January to a high of 85 °F (29 °C) in July, although a record low of −23 °F (−31 °C) was recorded in January 1994 and a record high of 105 °F (41 °C) was recorded in July 1954. Average monthly precipitation ranged from 2.42 inches (61 mm) in January to 4.86 inches (123 mm) in May. Hamilton County's climate thus falls within the Köppen climate classification system as a humid continental temperate climate, with pleasant spring and fall seasons surrounded by harsh cold and humid heat in the winter and summer, respectively. 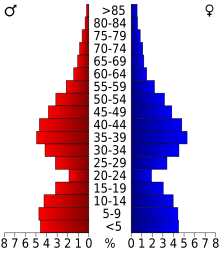 All content from Kiddle encyclopedia articles (including the article images and facts) can be freely used under Attribution-ShareAlike license, unless stated otherwise. Cite this article:
Hamilton County, Indiana Facts for Kids. Kiddle Encyclopedia.