Marion County is a county located in the U.S. state of Indiana. Census 2010 recorded a population of 903,393, making it the largest county in the state and 55th most populated county in the country, greater than the population of six states. The county seat is Indianapolis, the state capital and largest city. Marion County is consolidated with Indianapolis through an arrangement known as Unigov.

Marion County is included in the Indianapolis-Carmel-Anderson, IN Metropolitan Statistical Area.

The White River flows through the county where it is joined by Eagle Creek and Fall Creek, both of which have dams in the county forming Eagle Creek Reservoir and Geist Reservoir, respectively.

* I-69 currently ends in Indianapolis at the I-465 interchange in the northeast section of the county. The extension connecting Indianapolis and Evansville is expected to be completed around 2018.

Marion County was created on April 1, 1822, from part of the so-called "New Purchase" lands that had been obtained by the Treaty of St. Mary's; the Lenape had previously occupied the area. It is named for Francis Marion, a Brigadier General from South Carolina in the American Revolutionary War.

The state capital was moved to Indianapolis in Marion County from Corydon on January 10, 1825. This began a period of rapid growth in population. 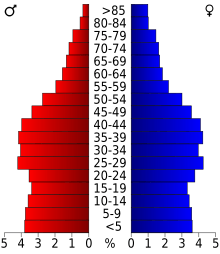 Marion County has a consolidated city-county government, known as Unigov, in which only four municipalities retain full government autonomy (including a mayor and city council) as "excluded cities". The remaining municipalities within the county are "included towns" and exercise very limited authority, mainly in zoning and appointing their own police departments and maintaining some of their own municipal services and town identities. They retain the ability to levy taxes for these purposes. Since many of these included towns were and remain fairly wealthy and influential within the county, they can still have considerable unofficial clout. Likewise, some neighborhoods that had already been formally incorporated into Indianapolis (such as Broad Ripple) possess similar influence. 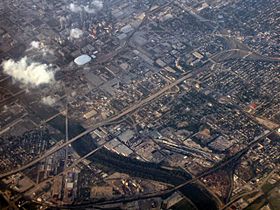 Downtown Indianapolis from the air.

Marion County has nine townships roughly organized into a grid-like, three-by-three pattern. This arrangement can be seen below, with the top being north.

All content from Kiddle encyclopedia articles (including the article images and facts) can be freely used under Attribution-ShareAlike license, unless stated otherwise. Cite this article:
Marion County, Indiana Facts for Kids. Kiddle Encyclopedia.