The fort was finished in 1908, after the construction of brick barracks, headquarters, officer's houses, and hospital. Other support structures, such as horse stables, were finished at the time. The Tenth Infantry Regiment immediately moved in after these facilities were constructed.

The fort represented the first effort to make a national army using state militia forces. It acted as classrooms, soldier support, and troop reception for all United States military activities from World War I to Operation: Desert Storm. During World War II, the base had a prisoner of war camp.

During the 1970s and 1980s, the area around Fort Harrison was attracting residents of Asian descent and, to a lesser extent, Hispanics.

The athlete village for the 1987 Pan American Games was built inside Fort Benjamin Harrison. Dining, lodging, nightclubbing, and practice facilities were constructed within the village. 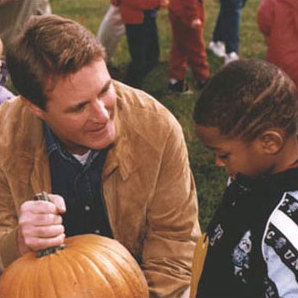 Following the Cold War, the United States government began downsizing by closing bases. Thus, in 1991 Fort Harrison of Indianapolis was decommissioned. The base had several amenities, including an officers' club, three officers' homes, special housing for Very Important Persons, and an eighteen-hole golf course. It also featured one of the largest hardwood forests in central Indiana.

The United States Department of the Interior chose in 1995 to give 1,700 acres (6.9 km2) of Fort Harrison's 2,500 acres (10 km2) to the Indiana Department of Natural Resources for use as a state park, similar to how Charlestown State Park started in Southern Indiana.

During the time that the Indiana Governor's mansion was being redone in 2003 to make it accessible to handicapped individuals, Indiana governor Frank O'Bannon and his wife lived at the Harrison House, the park's inn, as their official residence. Prior to the formation of the park, it had been a nurses dorm during World War II and later a VIP residence. They spent most of the year living there. When state governor's mansion was finished, the O'Bannon's moved out and the Harrison House was once again available for the general public to use.

Current plans include moving the Bell Ford Bridge from Jackson County, Indiana, into the park, allowing an additional way for pedestrians and bikers to cross Fall Creek. 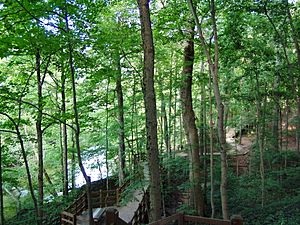 Unlike most state parks in Indiana, Fort Harrison is a day-use park, with its only overnight facilities being the inn, The Fort Golf Resort, which was the old officers' club. The fort's eighteen-hole golf course makes the park popular with Indianapolis golfers; it was redesigned by Pete Dye after the fort's closure, making it a 72-par course. Only golfers are allowed on the course. The VIP housing became the Harrison House Suites, and the four Officer's Homes are available for overnight lodging as well.

There are six hiking trails, and one for horseback riding, with horse rentals available. One of the hiking trails, Harrison Trace Trail, is paved, making it available for bikers and in-line skating. The longest of the trails is the Lawrence Creek Train, which is a 4.2-mile (6.8 km), single-track trail for mountain biking and walking. The wildflowers take the place of the ravines and steep hillsides typical of state parks in southern Indiana. Biking and fishing are also available; the park office sells the necessary state fishing permit. In winter, ice fishing is available. An interpretive center at the park office informs visitors of the history and natural environment of the park.

Fall Creek runs for 3.5 miles (5.6 km) inside the park, with smaller tributaries feeding it which are also within the boundaries of the park. Beaver, deer, frogs, squirrels, and turtles are the most commonly seen wildlife in the park; a heron pond is off-limits for visitors.

The Museum of 20th Century Warfare is located in Building 711 in the Historic Camp Glenn area of the park with exhibits about the Fort and technology, artifacts, uniforms and soldiers of the 20th Century. A 14-foot (4.3 m) model of the USS Indianapolis is part of the permanent exhibit. Temporary exhibits are changed every three months. The museum's programming includes re-enactments and living history camps. There is no admission fee other than the fee charged to enter the park.

All content from Kiddle encyclopedia articles (including the article images and facts) can be freely used under Attribution-ShareAlike license, unless stated otherwise. Cite this article:
Fort Harrison State Park Facts for Kids. Kiddle Encyclopedia.