The Bell Ford Post Patented Diagonal "Combination Bridge", often simply called the Bell Ford Bridge or Bell Ford Covered Bridge, is a dilapidated covered bridge located in Jackson County, Indiana, northwest of Seymour, Indiana. The bridge originally passed over the East Fork of the White River on a former alignment of State Road 258, and was placed on the National Register of Historic Places on March 25, 2005. 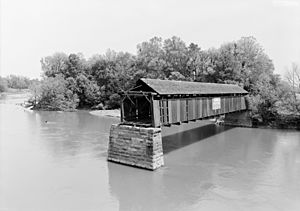 The bridge was originally built in 1869. Built in two sections, the wood and iron bridge measured 325 feet long. It reflects a time when the construction of bridges began switching from wood to iron / steel, every tensile web in the trusses made of iron, every compression member made from wood. The now unusual use of both materials has made it said that the Bell Ford Bridge is "the best representation of the American engineering “combination” bridge form". Until 1970 it was regularly used by both cars and animals. The western span collapsed in February 1999 during a windstorm, and the eastern span collapsed on January 2, 2006, nine months after it made the National Register. Its collapse meant that no combination variant Post Truss remained standing worldwide. 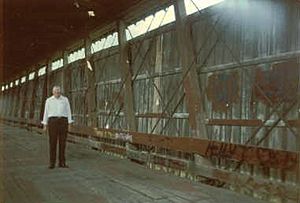 On August 19, 2008, the commissioners of Jackson County voted 3–0 to sell what remained of the bridge to an interest group who intended to rebuild the bridge at Fort Benjamin Harrison State Park in Indianapolis, Indiana, over sixty miles (97 km) away from its current location. It would allow walkers and bikers to cross over Fall Creek. The restoration is expected to take two years and cost $2 million (USD), with a hope that federal grants will be available. It has been promised that historical markers will denote its history in Jackson County, but some preservationists in Jackson County decry it being moved, saying the grant money was already there to pay for its renovation in Jackson County. One thing that might stop the bridge from being moved is if Jackson County would have to repay $123,000 of federal money for design and restoration work it received to use on the bridge since 1999. In late May 2010 an Indiana Department of Transportation representative requested of Jackson County commissioners that a decision be made in the coming month.

All content from Kiddle encyclopedia articles (including the article images and facts) can be freely used under Attribution-ShareAlike license, unless stated otherwise. Cite this article:
Bell Ford Bridge Facts for Kids. Kiddle Encyclopedia.