Beech Grove is an excluded city in Marion County, Indiana, United States. As of the 2010 census, the city's population is 14,192. The city is located within the Indianapolis metropolitan area.

The city's elevation, measured in feet above sea level, ranges from 766 (the Beech Creek waterway, where it is crossed by South 9th Avenue) to 845 (the northeastern portion of the Amtrak railroad property). It is higher than that of downtown Indianapolis.

The city contains several small non-navigable waterways. Beech Creek, McFarland Creek, Pullman Creek, and Victory Run all feed into Lick Creek, which (after leaving the city limits) feeds into the West Fork of the White River.

The city is one of three towns/cities in the United States with this name; the others are in Arkansas and Kentucky. There is also a town in Tennessee, which has the name as one word ("Beechgrove").

The climate in this area is characterized by hot, humid summers and generally mild to cool winters. According to the Köppen Climate Classification system, Beech Grove has a humid subtropical climate, abbreviated "Cfa" on climate maps.

Bolton's farm, "Beech Bank" and Churchman's cattle farm, "Beech Grove Farm", both reflected the abundance of beech trees in this area. This would eventually provide the reason for the city's name, although an early railroad stop in the area was known as "Ingallstown." The city's Sarah T. Bolton Park, situated on some of the former Beech Bank farmland, still contains several large beech trees along its southern boundary.

The actual city came into existence as a company town for a new railroad repair facility, the Beech Grove Shops, constructed by the Cleveland, Cincinnati, Chicago, and St. Louis Railroad (nicknamed the "Big Four"). Through acquisitions and mergers over the years, the railroad shops have been run by the New York Central, Penn Central and, presently, Amtrak rail systems. The complex sits on 108 acres (0.44 km2) with 700,000 square feet (65,000 m2) underroof. In 2007, Amtrak had 550 employees working there. In recognition of the city's heritage as a railroad town, Amtrak's business car 10001 is named The Beech Grove and is often used by agency officials when they travel the system.

Although Beech Grove was incorporated in late 1906, it did not see rapid growth until the completion of the railroad facility in 1908; by July 1907, for example, there were only four homes and two businesses in place.

Beech Grove grew with two annexations after World War II, with the final one (1967) taking place just before the Unigov legislation which merged Indianapolis with most of the rest of Marion County, preventing future annexation.

Two famous actors have listed Beech Grove as their birthplace—Clifton Webb (November 19, 1889–1966) and Steve McQueen (March 24, 1930–1980). Webb was born before Beech Grove came into existence as a separate entity, while McQueen was born at the City's St. Francis Hospital. Both moved away from the area while they were still infants; neither one grew up or lived in Beech Grove.

On October 15, 1948, Beech Grove received the honor of a visit by a sitting President of the United States. Harry S. Truman, a Mason, came to the city's Masonic Lodge during his legendary 'whistle stop' re-election campaign to participate in a ceremony involving a member of his staff who was one of its members.

Within the traditional focus in Indiana on high-school basketball, the Beech Grove Hornets have earned one IHSAA State Championship—that of its girls team, in Class 3A of the 2003 tournament. From that team, senior Katie Gearlds won both the IHSAA's Patricia Roy Mental Attitude Award (for Class 3A) and the "Miss Basketball" honor for the entire State. She went on to be a four-year starter for Purdue University from 2003 to 2007, and was the first Hornet graduate to play in an American professional sports major league (for the WNBA's Seattle Storm in the 2007 season). During the non-class years before 1996, the school had earned only three Sectional (equivalent to District in some states) titles (two by the boys' team in 1966 and 1992, and one by the girls' team in 1978); since the change to classes in Indiana high-school basketball, the boys' team has won one Class 3A Sectional title (2008).

The Hornets' most consistent state-level athletic success has come in wrestling, in which five students have won a total of seven individual state titles (Ralph Edwards and Gary Pierson in 1972, Ethan Harris in 2005, Danny Coyne in 2006, and a three-year unbeaten run by Steven Bradley from 1996 to 1998). The 1972 wrestling team endured the closest-ever runner-up finish in IHSAA wrestling history, ending up a half-point behind Bloomington. 60 Hornet wrestlers have qualified for the IHSAA State Finals (with several appearing two, three or four times), winning 55 placement medals. Also, in swimming, Andy McVey won two IHSAA individual titles in 1986, setting State records for that time; he had come back from a false-start disqualification in the 1985 finals, in which he had been favored to win. Andy won also this Herman F. Keller Mental Attitude Award.

Beech Grove High School's "Marching Hornets" band program has earned four Indiana State School Music Association (ISSMA) State Band Finals berths in its history, during the long service of former director James Williams. The present band, directed by alumnus Cory Wynn with the help of Scott Bradford and Chad Barton, has sought to return to that level of success, earning their first ISSMA Regional Gold rating in nine years in 2005. The Marching Hornets continue to achieve great levels of success on the marching music field. After 2005, the band has returned to the level of success that they had during the James Williams years. They have grown to become one of ISSMAs Class C "powerhouses" in the South. In 2009, 2010 and 2011, the Marching Hornets returned to the state finals in Lucas Oil Stadium in Indianapolis, for the first time in 19 years, where they placed 5th in Class C on 2009, 7th in Class C in 2010, and 2nd in Class C in 2011.

Some Beech Grove streets have been named in honor of notable citizens, such as Byland Drive (Mayor Richard Byland); Fletcher Lane (former Fire Chief, City Councilman and business owner Robert Fletcher); Killian Drive (Father Peter Killian); Newcomer Lane (Town Board member and businessman W. S. Newcomer); and Ticen Street (Town Board member Willard Ticen). A quartet of parallel streets in the northern part are named, in alphabetical order from south to north, for the cities of Albany, Buffalo, Cleveland and Detroit. In June 2007, a sign post on Hornet Avenue was given in honor of Katie Gearlds, honoring her arrival into the WNBA. In 2015 a new senior housing addition included the street Buckley Drive honoring former Fire Chief and Mayor Dennis Buckley.

The city has direct access to the Interstate Highway System as it straddles exit 52 of Interstate 465. It is served by local public bus routes of Indianapolis' IndyGo system. Routes 12-Minnesota and 13-Raymond serve 17th Avenue (Sherman Drive) from Southern Avenue to Main Street, with select trips serving Albany Street from 17th Avenue to 25th Avenue. Route 14-Prospect serves Emerson Avenue from the Amtrak railroad crossing all the way to Thompson Road, the southern end of Beech Grove. Route 16-Beech Grove serves Albany Street from 25th Avenue to 17th Avenue, 17th from Albany to Main, Main from 17th to Emerson Avenue, and Emerson to Thompson Road. Routes 12, 13, and 14 run seven days a week, while Route 16 runs only Monday through Saturday. There is currently no light rail or streetcar service, although one existed in the past.

Beech Grove maintains an address-numbering system distinct from surrounding Indianapolis. Addresses are numbered as either east/west or north/south from the intersection of Main Street and First Avenue.

The city's street grid reflects two distinct urban planning styles. The original roadway connecting Beech Grove to Indianapolis was Churchman Avenue, running northwest from Beech Grove. The original city was built to the north of Churchman Avenue, on a north/south grid pattern with alleys, centered on the widened roads of Main Street and Fifth Avenue. While a parkway was planned for both sides of Lick Creek, only a small segment of it was actually established.

With the post-World War II "Baby Boom" population growth, new streets were built south of Churchman Avenue in the modern style of sweeping curves and cul-de-sacs.

There were 5,898 households of which 31.7% had children under the age of 18 living with them, 37.3% were married couples living together, 16.9% had a female householder with no husband present, 6.2% had a male householder with no wife present, and 39.5% were non-families. 33.3% of all households were made up of individuals and 12.8% had someone living alone who was 65 years of age or older. The average household size was 2.36 and the average family size was 2.98. 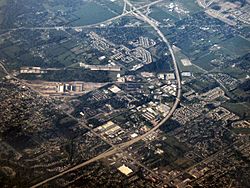 Beech Grove from the air (southeastern part of the City; Amtrak repair yards visible at left center).I-465 is clearly visible in this photo, and its interchange with I-74 is visible in the northeastern corner

There were 6,085 households out of which 30.8% had children under the age of 18 living with them, 45.1% were married couples living together, 13.2% had a female householder with no husband present and 36.9% were non-families. 31.5% of all households were made up of individuals and 12.9% had someone living alone who was 65 years of age or older. The average household size was 2.38 and the average family size was 2.99.

Beech Grove's oldest churches have existed since the earliest days of the city. Father Peter J. Killian established the Blessed Sacrament Parish (Roman Catholic Church) in the upstairs of his home in 1908; its present name of Holy Name of Jesus Parish was taken in 1918. A Methodist Episcopal meeting in the Clapp family home in 1908 eventually led to the present Beech Grove United Methodist Church. A noon-time Christian men's meeting of "Big Four" railroad employees in 1910 was the genesis of the present Beech Grove Christian Church. In late 1912, the First Baptist Church (since 1937, General Association of Regular Baptist Churches) was organized and is now in its second location within the city.

The Benedict Inn is a multi-use facility operated by the local Our Lady of Grace Monastery of the Sisters of the Order of St. Benedict. It contains meeting rooms, a gymnasium, and an indoor pool, which were part of the former Our Lady of Grace all-girls Catholic high school.

Established service groups include chapters of the Lions International and Kiwanis. The local Beech Grove Promoters Club was founded in 1953 as a chapter of the National Exchange Club, but left that organization in 1957 and adopted its present name. It organizes the city's two main public festivals—the 3rd of July Fireworks and the Fall Festival (since 1959) in September.

The city also contains Lodges of the Free and Accepted Masons, Fraternal Order of Eagles and Loyal Order of Moose. Posts of the American Legion and the Veterans of Foreign Wars are also active.

Past civic organizations which, while no longer in existence, performed service to the city include the Beech Grove Civic League and the Beech Grove Jaycees. The Jaycees organized a "Buck-A-Brick" campaign in the 1950s to build a house-sized Beech Grove Civic Center on South 3rd Avenue, offering meeting rooms to the citizens. (This facility is now the home of the Body of Christ Fellowship.)

The Scouting movement, both the Boy Scouts of America and the Girl Scouts of the USA, have had a long history within Beech Grove. For many years, Boy Scout Troop 79 was the city's main unit; present troops are 108. Various Girl Scout and Brownie Troops have existed. Beech Grove, although not a rural community, also has an active chapter of the traditionally-rural 4-H Club.

All content from Kiddle encyclopedia articles (including the article images and facts) can be freely used under Attribution-ShareAlike license, unless stated otherwise. Cite this article:
Beech Grove, Indiana Facts for Kids. Kiddle Encyclopedia.