Speedway is a town in Wayne Township, Marion County, Indiana, United States. The population was 11,812 at the 2010 U.S. Census. Speedway, which is an enclave of Indianapolis, is the home of the Indianapolis Motor Speedway.

Speedway was laid out in 1912 as a residential suburb. It took its name from the Indianapolis Motor Speedway. It is an early example of a residential community planned for the industrial plants located nearby. Carl G. Fisher, James A. Allison, Frank Wheeler, and Arthur Newby, founders of the Indianapolis Motor Speedway, planned the suburb of Speedway south of the track. Fisher and Allison owned plants nearby that needed workers, the Prest-O-Lite factory and Allison Engine Company. The investors' goal was to create a city without horses, where residents would drive automobiles, as well as participate in creating mechanical parts for new modes of transportation.

The Speedway Historic District was listed on the National Register of Historic Places in 2005.

The climate in this area is characterized by hot, humid summers and generally mild to cool winters. According to the Köppen Climate Classification system, Speedway has a humid subtropical climate, Cfa on climate maps. With a January daily mean of −2 °C (28 °F) however, Speedway is very close to the humid continental type. 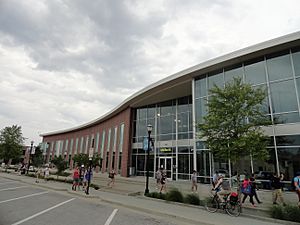 In addition to the Indianapolis Motor Speedway itself, several related companies are located south of the racetrack, including the United States Auto Club headquarters, the Dallara racecar factory, racing teams A. J. Foyt Racing, and Harding Racing, and the Speedway Indoor karting racetrack. Also, Allison Transmission has a factory nearby.

The town has a lending library, the Speedway Public Library.

All content from Kiddle encyclopedia articles (including the article images and facts) can be freely used under Attribution-ShareAlike license, unless stated otherwise. Cite this article:
Speedway, Indiana Facts for Kids. Kiddle Encyclopedia.