Downtown Indianapolis is a neighborhood area and the central business district of Indianapolis, Indiana, United States. Downtown is bordered by Interstate 65, Interstate 70, and the White River, and is situated near the geographic center of Marion County. Downtown has grown from the original 1821 town plat—often referred to as the Mile Square—to encompass a broader geographic area of central Indianapolis, containing several smaller historic neighborhoods. 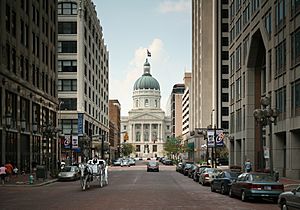 Indianapolis's downtown has undergone a transformation from a place of vacant storefronts and little activity to that of a dynamic urban district.In the 1970s, the city suffered from the problems that affected other Rust Belt cities, such as decreased economic activity, white flight, and racial tension.The City of Indianapolis dealt with these issues and came up with solutions to revitalize the city's downtown. 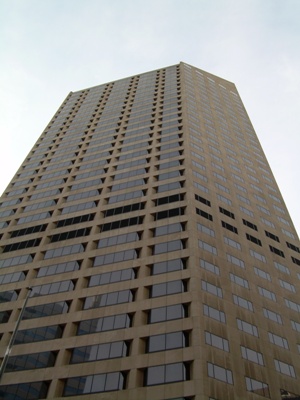 Modern skyscrapers were constructed in the area during the 1980s, including Salesforce Tower (built 1990). Revitalization of the Central Canal followed. This, along with plans for a new downtown mall, basketball arena, and new attractions such as museums, helped to revitalize Downtown Indianapolis.

Tourism is a large part of the economy of Downtown Indianapolis, due in large part to the presence of the Indiana Convention Center. White River State Park attracts tourists with its many offerings: the Eiteljorg Museum of American Indians and Western Art, the Indiana State Museum, the NCAA Hall of Champions, the Indianapolis Zoo, the White River Gardens and the Central Canal, which connects the park to other parts of downtown. Lucas Oil Stadium and Bankers Life Fieldhouse host professional sports as well as music concerts and other events. The Soldiers' and Sailors' Monument and the Indiana World War Memorial Plaza are two historical landmarks in Downtown Indianapolis. 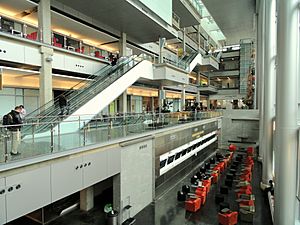 Downtown is home to Indiana University – Purdue University Indianapolis (IUPUI), the third largest campus in the state based on enrollment, with 30,105 students. IUPUI contains two colleges and 18 schools, including the Herron School of Art and Design, Robert H. McKinney School of Law, School of Dentistry, and the Indiana University School of Medicine, the largest medical school in the U.S.

Located Downtown, the Indianapolis Public Library's Central Library is the hub of the public library's 23 branch system, which served 4.2 million patrons and a circulation of 15.9 million materials in 2014. 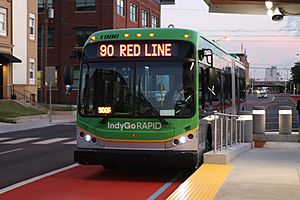 Downtown Indianapolis has been the regional transportation hub for central Indiana since its establishment. The first major federally funded highway in the U.S., the National Road (now Washington Street), reached Indianapolis in 1836, followed by the railroad in 1847. Indianapolis Union Station opened in 1853 as the world's first union station. Citizen's Street and Railway Company was established in 1864, operating the city's first mule-drawn streetcar line. Opened in 1904 on West Market Street, the Indianapolis Traction Terminal was the largest interurban station in the world, handling 500 trains daily and 7 million passengers annually. Ultimately doomed by the automobile, the terminal closed in 1941, followed by the streetcar system in 1957.

Two of the region's four interstate highways (Interstate 65 and Interstate 70) form an "inner loop" on the north, east, and south sides of downtown Indianapolis. I-65 and I-70 radiate from downtown to connect with the "outer loop," a beltway called Interstate 465.

IndyGo operates the city's public transit network, with downtown Indianapolis serving as the region's hub and spoke origin. In 2016, the Julia M. Carson Transit Center opened as the downtown hub for 27 of its 31 bus routes. The Central Indiana Regional Transportation Authority (CIRTA) is a quasi-governmental agency that operates three public buses from the Julia M. Carson Transit Center to employment centers in Plainfield and Whitestown. 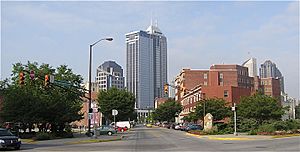 Developments in Downtown Indianapolis include the creation of the Cultural Trail throughout downtown, construction of new mid to high rise buildings, and the enlargement of the convention center.

Six of the seven designated Cultural Districts of Indianapolis are in or adjoining downtown. They ar Canal and White River State Park, Fountain Square, Indiana Avenue, Market East, Mass Ave, and the Wholesale District. These areas have held historic and cultural importance to the city. In recent years they have been revitalized and are becoming major centers for tourism, commerce and residential living. 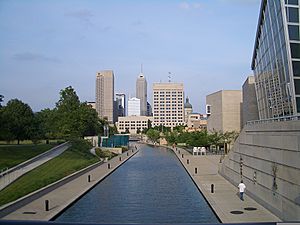 The skyline of downtown Indianapolis from the Indiana Central Canal with the Medal of Honor Memorial and Indiana State Museum on the sides.

Georgia Street in downtown was renovated to serve as Super Bowl Village during Super Bowl XLVI, and as an outdoor event space after the Super Bowl.

Complete in 2013, the Indianapolis Cultural Trail is an urban bike and pedestrian path that connects the city's five downtown Cultural Districts, neighborhoods, and entertainment amenities, and serves as the downtown hub for the entire central Indiana greenway system. The trail includes benches, bike racks, lighting, signage and bike rentals/drop-offs along the way and features local art work. 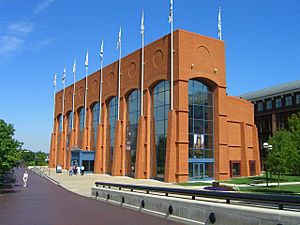 The NCAA Hall of Champions is a museum, exhibition center, and conference center located adjacent to the national office of the National Collegiate Athletic Association (NCAA) in White River State Park. The building was designed by architect Michael Graves.

At the center of Indianapolis is Monument Circle, a traffic circle at the intersection of Meridian and Market Streets, featuring the Soldiers' and Sailors' Monument. Monument Circle is depicted on the city’s flag. It is in the shadow of Indiana's tallest skyscraper, the Chase Tower. Until the early 1960s, Indianapolis zoning laws stated that no building could be taller than the Soldiers and Sailors Monument. Each Christmas season, lights are strung onto the monument and lit in a ceremony known as the Circle of Lights, which attracts tens of thousands of Hoosiers to downtown Indianapolis on the day after Thanksgiving. 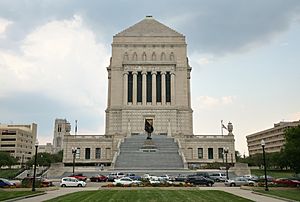 A five-block plaza at the intersection of Meridian and Vermont surrounds a large memorial dedicated to Hoosiers who have fought in American wars. It was originally constructed to honor the Indiana soldiers who died in World War I, but construction was halted due to lack of funding during the Great Depression, and it was not completed until 1951. The purpose of the memorial was later altered to encompass all American wars in which Hoosiers fought.

The monument is modeled after the Mausoleum of Maussollos. At 210 feet (64 m) tall it is approximately seventy-five feet taller than the original Mausoleum. On the north end of the War Memorial Plaza is the national headquarters of the American Legion and the Indianapolis Public Library's Central Library. 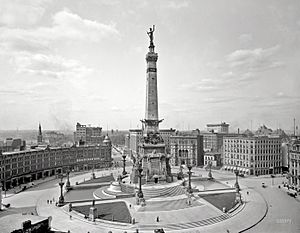 The city is second only to Washington, D.C., for number of war monuments inside city limits. 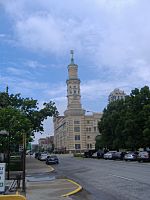 The Murat Shrine, now officially known as Old National Centre and originally known as the Murat Temple and Murat Centre, is an entertainment venue in Indianapolis, Indiana, owned by the Murat Shriners of the Ancient Arabic Order of the Nobles of the Mystic Shrine. It is the oldest stage house in downtown Indianapolis that is still standing, the only Shrine temple in the world with a French-originating name, and the largest Shrine temple in North America. 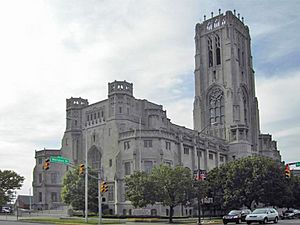 Other attractions in Downtown Indianapolis include:

The first instances of permanently installed public art begin in the early 1970s and include the following artworks:

Today there are many more public artworks in downtown and all around the city. 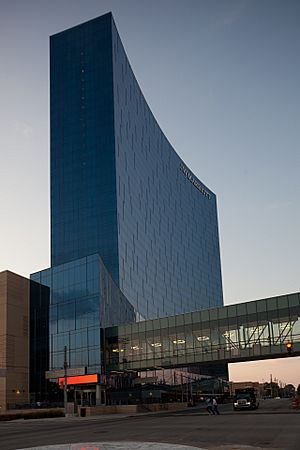 JW Marriott Indianapolis houses the most hotel rooms in the city, with 1,005.

The hospitality industry is an increasingly vital sector to the Indianapolis economy, especially Downtown. According to Visit Indy, 28.2 million visitors generated $4.9 billion in 2015, the fourth straight year of record growth. Indianapolis has long been a sport tourism destination, but has more recently relied on conventions. The Indiana Convention Center (ICC) and Lucas Oil Stadium are considered mega convention center facilities, with a combined 750,000 square feet (70,000 m2) of exhibition space. ICC is connected to 12 hotels and 4,700 hotel rooms, the most of any U.S. convention center. In 2008, the facility hosted 42 national conventions with an attendance of 317,815; in 2014, it hosted 106 for an attendance of 635,701.

According to Downtown Indy, Inc., there are 34 hotels with a total of 7,839 hotel rooms. Most hotels are clustered in the blocks immediately adjacent to the Indiana Convention Center in Downtown's southeast quadrant. Notable hotels include:

All content from Kiddle encyclopedia articles (including the article images and facts) can be freely used under Attribution-ShareAlike license, unless stated otherwise. Cite this article:
Downtown Indianapolis Facts for Kids. Kiddle Encyclopedia.