The Indianapolis Symphony Orchestra (ISO) is a major American orchestra based in Indianapolis, Indiana. The largest performing arts organization in Indiana, the orchestra is based at the Hilbert Circle Theatre in downtown Indianapolis on Monument Circle. 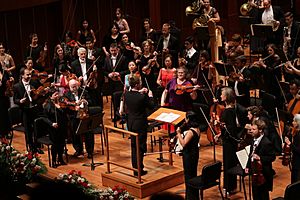 The Indianapolis Symphony Orchestra performing at Hilbert Circle Theatre in 2019.

The orchestra was founded in 1930 by Ferdinand Schaefer, a local violin professor, with the help of Leonard A. Strauss; the latter became the first president of the ISO. In 1937, Fabien Sevitzky was hired as the orchestra's first music director, as the musicians became fully professional, paid a weekly salary for a 20-week season. The orchestra quickly ascended to national prominence, issuing a series of phonograph recordings on RCA Victor and Capitol Records in the 1940s and early 1950s.

In 1956, Izler Solomon was appointed music director. The orchestra toured nationally and produced a series of international salute concerts. This series won a US State Department Award.

The orchestra performed in such venues as Clowes Hall on the campus of Butler University and Caleb Mills Hall. John Nelson became music director in 1976. During his tenure, the orchestra relocated to the renovated Hilbert Circle Theatre in downtown Indianapolis, which re-opened on October 12, 1984. Nelson brought the ISO back to the airwaves on NPR and PBS, as well as concerts in Carnegie Hall in 1989 and 1991 and at the Kennedy Center. In 1987, he took the orchestra on its first-ever foreign tour in Germany, with concertmaster Hidetaro Suzuki.

Raymond Leppard succeeded Nelson as music director, in 1987. Under Leppard's direction, the orchestra began a 52-week season, and made a series of recordings on the Koss Classics label. Leppard returned the orchestra to Europe for two more tours in 1993 and 1997. Indianapolis On The Air, a weekly radio series begun in 1994, is produced by WFYI in Indianapolis and is syndicated to over 250 radio stations in 38 states. In 2009, the ISO announced its first-ever ensemble-in-residence, Time for Three.

In April 2010, Krzysztof Urbański first guest-conducted the orchestra. He was subsequently engaged for a return appearance in June 2010 at the orchestra's summer series, "Symphony on the Prairie". Based on these two appearances, the ISO named Urbański its 7th music director, effective September 1, 2011, with an initial contract of 4 years. In May 2019, the orchestra announced that Urbanski will conclude his tenure as its music director at the close of the 2020-2021 season.

Annually, the Indianapolis Symphony Orchestra performs 200 concerts for over 350,000 people. It has a discography of 36 recordings. The Kroger Symphony on the Prairie, performed at Conner Prairie in Fishers, has been a popular summer series since 1982. It has drawn a record 13,000 attendees for the Patriotic Pops night.

Some of the orchestra's earliest recordings have re-appeared on the Historic Recording label.

All content from Kiddle encyclopedia articles (including the article images and facts) can be freely used under Attribution-ShareAlike license, unless stated otherwise. Cite this article:
Indianapolis Symphony Orchestra Facts for Kids. Kiddle Encyclopedia.