The Indianapolis Cultural Trail: A Legacy of Gene and Marilyn Glick is an 8.1-mile-long (13.0 km) urban multi-use trail and linear park located in central Indianapolis, Indiana. The trail has inspired similar projects in U.S. cities such as Charlotte, Cleveland, Denver, and St. Louis. 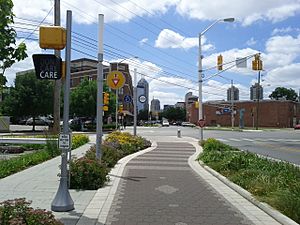 Care/Don't Care by Indianapolis-artist Jamie Pawlus, located on the Massachusetts Avenue spur of the Cultural Trail.

The walk can be accessed at West Walnut Street between North Meridian Street and North Capitol Avenue. 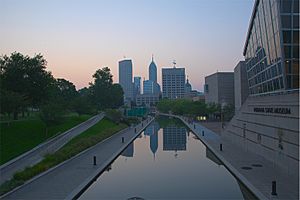 Indianapolis has seven designated neighborhoods as Cultural Districts, first established in 1999. The purpose of these designations was to capitalize on cultural institutions within historically significant neighborhoods unique to the city's heritage for economic development and revitalization.  Six of the seven districts are located along the Cultural Trail.

The seventh district, Broad Ripple Village (about 6.5 miles (10.5 km) north), is connected to the Cultural Trail via the Monon Trail.

As of 2019[update], there are nine commissioned art installations along the trail:

In addition to commissioned art, the Arts Council of Indianapolis's "Indy Arts Guide" lists 61 pieces of public art along or near the trail as of January 2019[update]. In August 2018, Citizens Energy Group partnered with the Harrison Center for the Arts to install 20 artist-designed manhole covers along the trail. The initiative sought to bring public attention to Indianapolis waterways and the $1.9 billion DigIndy project to correct the city's combined sewer overflows (CSOs) by 2025.

After 12 years of planning and six years of construction, the Indianapolis Cultural Trail: A Legacy of Gene & Marilyn Glick officially opened in 2013. The $62.5 million public-private partnership, spurred by an initial donation of $15 million by philanthropists Gene B. Glick and Marilyn Glick, resulted in 8 miles (13 km) of urban bike and pedestrian corridors linking the city's cultural districts with neighborhoods, IUPUI, and every significant arts, cultural, heritage, sports and entertainment venue downtown. 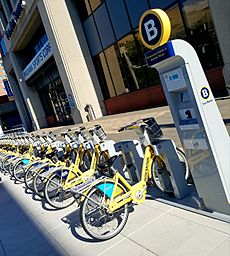 The Indianapolis Cultural Trail, Inc., in partnership with BCycle and the Herb Simon Family Foundation, launched Indiana Pacers Bikeshare in April 2014 as the city's bicycle-sharing system, consisting of 29 stations and 251 bicycles. The system is named after the city's NBA franchise, the Indiana Pacers, which is owned by Herb Simon. An expansion in September 2019 added 21 stations and 275 more bicycles. The expansion was partially funded through a $1.2 million Congestion Mitigation and Air Quality (CMAQ) program grant through the Federal Highway Administration. As of September 2020, Indianapolis Cultural Trail, Inc. manages, maintains, and promotes Indiana Pacers Bikeshare's 50 stations and 525 bicycles. About half of the Indianapolis Cultural Trail's annual $1 million budget is allocated to managing the program, which is self-sustaining through bike rental fees, annual memberships, grants, and sponsorships.

According to the Indianapolis Business Journal, early grant applications predicted $863 million in development generated within a 0.5 miles (0.80 km) radius of the trail. An Indiana University Public Policy Institute report released in March 2015 found that assessed value of properties within 500 feet (150 m) of the trail increased by $1,013,544,460 from 2008 to 2014. Other key finds from the report:

The trail has also been considered a boon for convention business and inspired interest from cities throughout the U.S. and Europe.

All content from Kiddle encyclopedia articles (including the article images and facts) can be freely used under Attribution-ShareAlike license, unless stated otherwise. Cite this article:
Indianapolis Cultural Trail Facts for Kids. Kiddle Encyclopedia.