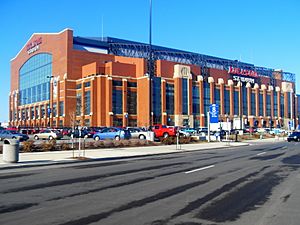 Lucas Oil Stadium is in Indianapolis, Indiana and is the home of the Indianapolis Colts, an NFL team. The stadium had its first game on August 24, 2008 when the Colts played the Buffalo Bills.

The stadium also hosted the 2015 final four between the Wisconsin Badgers and the previously unbeaten Kentucky Wildcats.

All content from Kiddle encyclopedia articles (including the article images and facts) can be freely used under Attribution-ShareAlike license, unless stated otherwise. Cite this article:
Lucas Oil Stadium Facts for Kids. Kiddle Encyclopedia.