List of tallest buildings in Indianapolis facts for kids 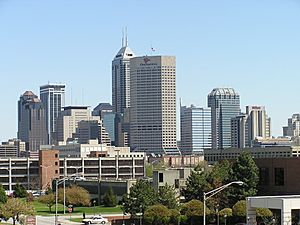 Skyline of Downtown Indy, 2007. Use cursor to identify buildings

The history of skyscrapers in Indianapolis began with the completion in 1895 of the Thomas Building, which is regarded as the first high-rise in the city. Before it was demolished, this structure stood 13 stories and 170 feet (52 m) in height. Indianapolis went through an early high-rise construction boom in the 1960s, during which time the city saw the completion of the 372-foot (113 m) City-County Building. The City-County Building was the first building in the city to rise higher than the Soldiers' and Sailors' Monument, and was the tallest building in the city until 1970. However, the pace of new high-rise construction then slowed until 1982; starting in that year, Indianapolis entered into a large building boom that lasted until 1990. During that time, six of the city's ten tallest skyscrapers were built, including the Chase Tower, OneAmerica Tower and Market Tower. Based on existing and under-construction buildings over 500 feet (152 m) tall, the skyline of Indianapolis is ranked first in Indiana, sixth in the Midwest (after Chicago, Minneapolis, Detroit, Columbus and Cleveland) and 24th in the country. As of May 2014, there are 142 completed high-rises in the city. Indianapolis ranks first in the state in high-rise count, ahead of Fort Wayne.

Indianapolis was the site of very little high-rise construction from the end of the boom in 1990 until the mid-2000s; the city has since entered into a third period of high-rise construction, with four skyscrapers that rank in city's 20 tallest buildings being completed after 2000. The tallest of these is the 376-foot (115 m) JW Marriott Indianapolis, standing at 34 stories tall. Other projects completed after 2000 are the 287-foot (87 m) Conrad Indianapolis and 259 feet (79 m) Simon Property Group Headquarters, both in 2006. One Indiana Square, now known as Regions Tower, went through an exterior refinishing after being damaged by high winds on April 2, 2006. As of February 2019, there are four high-rise buildings under construction, approved for construction or proposed for construction in Indianapolis.

This list ranks Indianapolis buildings that stand at least 200 feet (61 m) tall, based on standard height measurement. This includes spires and architectural details but does not include antenna masts. An equal sign (=) following a rank indicates the same height between two or more buildings. The "Year" column indicates the year in which a building was completed.

This lists high-rises that are under construction, approved or proposed in Indianapolis and planned to rise at least 200 feet (61 m) in height, but are not yet completed structures. A floor count of 15 stories is used as the cutoff in place of a height of 200 feet (61 m) for buildings whose heights have not yet been released by their developers.

This lists buildings that once held the title of tallest building in Indianapolis. The Indiana State Soldiers' and Sailors' Monument is often billed as the tallest building in Indianapolis from its completion in 1902 until the completion of the City-County Building. Because it is classified as an uninhabitable building, it is omitted from this list.

A. New York has 206 existing and under construction buildings over 500 feet (152 m), Chicago has 107, Miami has 37, Houston has 30, Los Angeles has 22, Dallas has 19, Atlanta has 19, San Francisco has 18, Las Vegas has 17, Boston has 16, Seattle has 14, Philadelphia has 15, Minneapolis has 10, Pittsburgh has 10, Jersey City has nine, Denver has eight, Detroit has seven, Charlotte has six, Columbus has five, Cleveland has four, New Orleans has four, Tulsa has four, and Tampa has four. Indianapolis, Kansas City, Portland, St. Louis and Hartford are tied with three each. Source of Skyline ranking information: SkyscraperPage.com: New York, Chicago, Miami, Houston, Los Angeles, Dallas, Atlanta, San Francisco, Las Vegas, Boston, Seattle, Philadelphia, Pittsburgh, Jersey City, Minneapolis, Denver, Detroit, Charlotte, Columbus, Tulsa, Cleveland, New Orleans, Tampa, Indianapolis, Kansas City, Portland, St. Louis, Hartford.
B. The Soldiers' and Sailors' Monument is not a habitable building; the structure is included in this list for comparative purposes, but as it is not a high-rise it is not given a ranking.
C. This building was constructed as One Indiana Square, but has since been renamed Regions Tower
D. This building was constructed as the AUL Building, but has since been renamed OneAmerica Tower.
E. This building was constructed as the Bank One Tower, but has since been renamed Salesforce Tower.

All content from Kiddle encyclopedia articles (including the article images and facts) can be freely used under Attribution-ShareAlike license, unless stated otherwise. Cite this article:
List of tallest buildings in Indianapolis Facts for Kids. Kiddle Encyclopedia.