Morgan County is a county in the U.S. state of Indiana. As of 2010, the population was 68,894. The county seat is Martinsville.

Morgan County is between Indianapolis, in Marion County, and Bloomington in Monroe County. It is included in the Indianapolis-Carmel-Anderson, IN Metropolitan Statistical Area. Two state highways, State Roads 37 and 67, carry large numbers of daily commuters between the two larger communities. The county has 14 townships which provide local services.

Morgan County was formed in 1822. It was named for Gen. Daniel Morgan, who defeated the British at the Battle of Cowpens in the Revolutionary War. In the late nineteenth and early twentieth centuries, mineral springs in Martinsville gave rise to several spas, and the nickname of the Martinsville High School athletic teams has subsequently been the Artesians.

Settlers in Morgan County in the early nineteenth century came predominantly from southern states. The Mooresville area and surrounding communities received large numbers of southern Quakers, driven to migrate because of their opposition to slavery. Paul Hadley, a Mooresville resident, was the designer of the current Indiana flag, as well as a locally prominent water color artist in the early twentieth century.

County government took several steps forward in the 2000s, creating a new Plan Commission, re-instituting a county economic development organization, and establishing the county's first Park and Recreation Board between 2000 and 2004. Morgan County also was the first county in the metropolitan Indianapolis region to establish a smoking ban ordinance for restaurants, taking that step in 2004. Other communities in the region soon followed Morgan County's lead.

A County Achievement Award from the Association of Indiana Counties in 2006 was the third award from the group given to Morgan County in a ten-year span, adding to 1997 and 2003 awards.

In 2006 Morgan County was the first in the central Indiana region to offer a prescription drug discount program to its residents at no charge to individuals, helping residents save an average of 20% on prescriptions. Also during 2006, Morgan and Hendricks Counties became the first in Indiana to develop neighboring and co-related TIF (Tax Increment Financing) districts for economic development activity.

Morgan County has developed a new thoroughfare plan that is integrated with the Mooresville thoroughfare plan, and also recently completed a new capital improvement plan. Both activities are preludes to a new comprehensive plan being developed for the county.

The first building used for Morgan County courts was the log house of a pioneer. Work began in 1823 to build the first courthouse, a two story log house. A brick courthouse replaced it in 1833.

The Morgan County courthouse was designed by Isaac Hodgson in the Italianate style. It was built from 1857 to 1859 by Perry M. Blankenship of Martinsville at a cost of $32,000. It was almost identical to Hodgson's Jennings County courthouse in Vernon, which was also begun in 1857, but the Martinsville building received an addition in the 1970s; the original section was also remodeled and renovated at that time. The building is of red brick with white stone quoins and has tall windows with round arches, arranged in pairs. It is one of the few remaining pre-Civil War courthouses.

The county also is home to large areas of land that were not glaciated during the last ice age. The river valley and contributing watersheds, along with the non-glaciated hills, results in a topography unlike the rest of the metropolitan Indianapolis area. County residents are proud of the scenic terrain, and in recent years have established a county park system and a bike/pedestrian trail system plan to provide protection and access to the amenities. An annual five mile (8 km) run ("Run to the Future", June 10, 2006) is held as a fundraiser for the path system endowment. 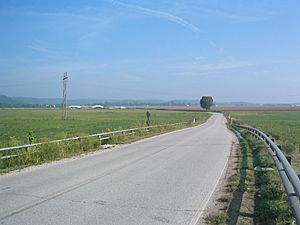 All content from Kiddle encyclopedia articles (including the article images and facts) can be freely used under Attribution-ShareAlike license, unless stated otherwise. Cite this article:
Morgan County, Indiana Facts for Kids. Kiddle Encyclopedia.