Flag of Indiana facts for kids

The flag of Indiana was designed by Paul Hadley and officially adopted by the state of Indiana on May 11, 1917. It was the state's first official flag and has remained unchanged since then except for the creation of a statute to standardize the production of the flag. 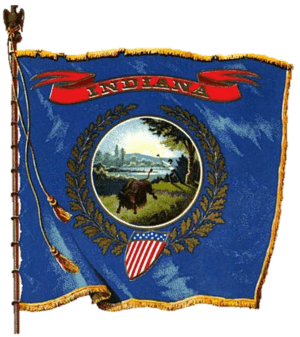 To commemorate the state’s 1916 centennial anniversary, the Indiana General Assembly issued a resolution to adopt a state flag. At the request of the General Assembly, a contest was sponsored by the Indiana Society of the Daughters of the American Revolution to design a flag to serve as the official state banner. As an incentive to increase the number of submissions, the contest offered the winner a one hundred dollar cash prize. More than two hundred submissions were received and examined by the Society before a winner was selected. The entry created by Paul Hadley of Mooresville, Indiana, was ultimately chosen as the winner of the contest and the cash prize.

On May 31, 1917, the flag was chosen as the state's official banner. The General Assembly made only one change to Hadley's original design: they added the word Indiana, in a crescent shape, over the top of the torch. The state banner was later renamed the state's flag in a new statute passed in 1955 that also standardized the dimensions of the flag.

In 2001, a survey conducted by the North American Vexillological Association (NAVA) placed Indiana's flag 32nd in design quality out of the 72 Canadian provincial, U.S. state and U.S. territorial flags ranked. 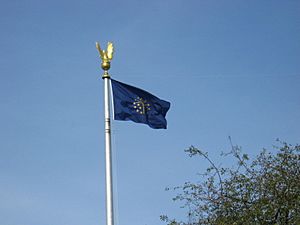 The current statute that governs the design of the state flag states:

The flag's dimensions shall be three feet fly by two feet hoist; or five feet fly by three feet hoist; or any size proportionate to either of those dimensions. The field of the flag shall be blue with nineteen stars and a flaming torch in gold or buff. Thirteen stars shall be arranged in an outer circle, representing the original thirteen states; five stars shall be arranged in a half circle below the torch and inside the outer circle of stars, representing the states admitted prior to Indiana; and the nineteenth star, appreciably larger than the others and representing Indiana shall be placed above the flame of the torch. The outer circle of stars shall be so arranged that one star shall appear directly in the middle at the top of the circle, and the word "Indiana" shall be placed in a half circle over and above the star representing Indiana and midway between it and the star in the center above it. Rays shall be shown radiating from the torch to the three stars on each side of the star in the upper center of the circle.

Several other laws govern the use of the state flag. The flag is required to be flown by all state militias and the Indiana National Guard. It is to be on display at the Indiana Statehouse at all times. The flag must also be displayed at any agency that is funded in part or in full by the state government, including public schools, state universities, and state parks. In all other respects the flag should be treated with the same care and respect as the flag of the United States.

In late 2008, Tribune Media station WTTV in Indianapolis began to use the flag's design as part of their station's logo until acquiring CBS affiliation in January 2015.

A variation of the Indiana state flag was used as the Gotham flag in the 1989 movie Batman. The flag can be seen in the mayor's office.

The logo of the BP-acquired Amoco Corporation (formerly Standard Oil of Indiana) prominently features a torch to commemorate the company's Indiana origins; it remains in use at the few BP stations using Amoco and Standard trade dress to maintain trademark protection.

All content from Kiddle encyclopedia articles (including the article images and facts) can be freely used under Attribution-ShareAlike license, unless stated otherwise. Cite this article:
Flag of Indiana Facts for Kids. Kiddle Encyclopedia.