Martinsville is a city in Washington Township, Morgan County, in the U.S. state of Indiana. The population was 11,828 at the 2010 United States Census. The city is the county seat of Morgan County.

Martinsville was founded in 1822. It is said to be named for John Martin, a county commissioner.

In 1899, Eugene Shireman, a Martinsville entrepreneur, turned his swamp land into fisheries and started Grassyfork Fisheries. Once dubbed the "Goldfish Capital of the World", today Martinsville has several large fisheries that sell fish to many parts of the world. Shireman's actions changed the landscape of the Martinsville area, and his fisheries can be seen today throughout Shireman subdivision. Martinsville is also home to other fisheries.

From 1888 until 1968, visitors sought out the many artesian mineral water health spas (which were called sanitariums then) of Martinsville for health benefits. Over nearly 100 years, almost a dozen sanitariums were in operation for various periods of time, including the first black spa in Martinsville.

Albert Merritt (1871–1958), beloved founder of the Boy's Club in Martinsville, born near Bowling Green, was the son of former slaves. He came to Martinsville Mineral Springs Sanitarium in the 1890s from a job as a porter at the Sennings Hotel in Louisville, and lived at the sanitarium for the rest of his life, never marrying. He worked with the children of Martinsville for fifty years, building a clubhouse on North Marion Street. Merritt Park on the northwest end of town is named for Albert.

Visitors would travel by rail and road to bathe and refresh in the mineral springs and waters. Many luminaries visited Martinsville in the early 20th century to enjoy the mineral waters and spas for their perceived therapeutic and health restoring qualities. On top of what used to be the National Sanitarium a refurbished neon sign still displays "Martinsville City of Mineral Water" as it did before.

In 1892, the Old Hickory Furniture Company was formed. The Morgan County Public Library’s Digital Archive has a collection of photographs of Old Hickory furniture including some displays for Marshall Field & Co.

In addition, local leadership has suffered scrutinization for issues such as drinking water pollution, the local hospital's decisions, and the town debt, which increased to $27 million in 2015. Unable to make payroll, funding from the police and fire force was redirected in order to pay city employees. 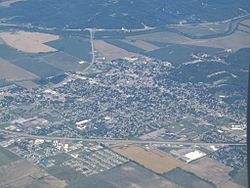 An aerial photograph of Martinsville in June 2006, taken looking northwest.

The climate in this area is characterized by hot, humid summers and generally mild to cool winters. According to the Köppen Climate Classification system, Martinsville has a humid subtropical climate, abbreviated "Cfa" on climate maps.

Martinsville has a public library, a branch of the Morgan County Public Library.

All content from Kiddle encyclopedia articles (including the article images and facts) can be freely used under Attribution-ShareAlike license, unless stated otherwise. Cite this article:
Martinsville, Indiana Facts for Kids. Kiddle Encyclopedia.