Putnam County is a county located in the U.S. state of Indiana. As of 2010, the population was 37,963. The county seat is Greencastle. The name is in honor of Israel Putnam, who was a hero in the French and Indian War and a general in the American Revolutionary War. The county was formed on April 1, 1822 from Owen and Vigo Counties and parts of the Wabash New Purchase attached to Monroe and Parke Counties.

Putnam County is included in the Indianapolis-Carmel-Anderson, IN Metropolitan Statistical Area. 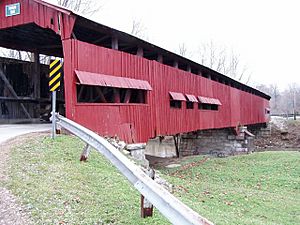 The Dick Huffman or Webster CB is the furthest south, just off I-70. This route is not at an interstate exit.

Houck CB is out in the country, south of Greencastle. Oakala CB is just a short distance away from Houk CB.

According to the Encyclopedia of Haunted Indiana, the Edna Collins CB is considered to be haunted.

The Dunbar CB is nearest to Greencastle, which can be accessed via US 231 north, under the concrete railroad viaduct.

The Baker's Camp CB is east of Bainbridge on the old US 36.

The Cornstalk CB is the furthest north. It's east of the town of Raccoon, which is just off US 231. It is on a secondary road out of town to the south.

All content from Kiddle encyclopedia articles (including the article images and facts) can be freely used under Attribution-ShareAlike license, unless stated otherwise. Cite this article:
Putnam County, Indiana Facts for Kids. Kiddle Encyclopedia.