Greencastle is a city in Greencastle Township, Putnam County, Indiana, United States, and the county seat of Putnam County. It was founded in 1821 by Ephraim Dukes on a land grant. He named the settlement for his hometown of Greencastle, Pennsylvania. Greencastle was a village or town operating under authority of the Putnam County commissioners until March 9, 1849, when it became a town by special act of the local legislature. Greencastle, Indiana, officially became a city after an election held on July 8, 1861. The first mayor of Greencastle was E. R. Kercheval, a member of the Freemason Temple Lodge #47. The city became the county seat of Putnam County. The population was 10,326 at the 2010 census. It is located near Interstate 70 approximately halfway between Terre Haute and Indianapolis in the west-central portion of the state. Greencastle is well known as being the location of DePauw University. 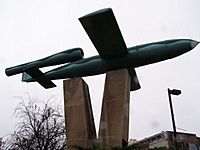 German V-1 mounted atop a limestone Victory Vee, located on the Putnam County Courthouse Square. The V-1, commonly known as a “buzz bomb,” was a flying bomb and precursor to the modern cruise missile.

Historical Events and Places In Greencastle

Greencastle and the surrounding Putnam County communities are home to 20 historical sites according to the National Register of Historical Places.

Greencastle also has three historic neighborhoods – Old Greencastle, the Eastern Enlargement and the Northwood Neighborhood that were added to the National Register of Historical Places in 2011.

Peace Lutheran School is a private school in Greencastle, Indiana, which according to their website is "an outreach of Peace Lutheran Church." It was founded in 1984 as a preschool. In 1995, kindergarten was added as a half-day program. The year 2002 marked the beginning of the Primary School with the addition of 5th grade. (In Indiana, Primary Schools are typically interpreted as 1st through 2nd, 3rd, or 4th grades.) As of 2011, the school hosts grades kindergarten through 6th grade.

DePauw today has an enrollment of about 2400 students. Students hail from 42 states and 32 countries with a 20.4% multicultural enrollment. DePauw's liberal arts education gives students a chance to gain general knowledge outside of their direct area of study. DePauw consistently ranks among the top 50 liberal arts colleges in America in both U.S. News & World Report rankings and Kiplinger's “best value” list. In a 2009 Center for College Affordability & Productivity ranking published in Forbes magazine, DePauw was ranked No. 42 under “America’s Best Colleges.” 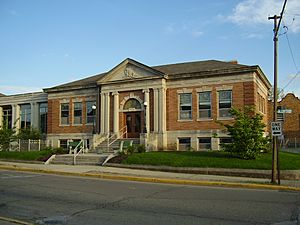 Greencastle is the home of the Putnam County Public Library, a public library which serves patrons from Putnam County and surrounding counties. Services include books, books on CD, ebooks, movies, music, newspapers, magazines, computer and Internet access, Wi-fi, inter-library loan, programming for all ages, author series, book discussion groups and multiple public meeting rooms. The PCPL Local History and Genealogy Department is dedicated to collecting, preserving, and providing public access to Putnam County's historical records. As of 2017 the library began an adult literacy program, the Putnam Adult Literacy Services (PALS). In conjunction with the PALS program, the PALS Pups program allows children to read to the certified "good citizen" dogs. The Putnam County Public Library is a Carnegie Library and was built in 1903. In 1996, a large addition made the library what it is today.

Greencastle also once had a municipal Carnegie library, which is now known as The William Weston Clarke Emison Museum of Art (otherwise known as The Emison Museum of Art or The Emison Art Center). The library became a museum in 1986, and was renamed to honor the financial contributions of James W. Emison, a longtime member of DePauw University's Board of Trustees and benefactor of the University, and other Emison family members. The building was constructed in 1908. The Emison Art Center was originally the Depauw University (then, Indiana Asbury University) campus library.

The Putnam County Museum houses a "permanent collection of nearly 2,000 Putnam County related artifacts offers the county residents and visitors a historical overview of the county, including its significance during the Civil War and a glimpse into everyday life of Putnam residents in the past. The Museum also showcases the Putnam County contemporary artists in revolving exhibits, featuring at least one new artist every month."

All content from Kiddle encyclopedia articles (including the article images and facts) can be freely used under Attribution-ShareAlike license, unless stated otherwise. Cite this article:
Greencastle, Indiana Facts for Kids. Kiddle Encyclopedia.