Anderson, named after Chief William Anderson, is a city in and the county seat of Madison County, Indiana, United States. It is the principal city of the Anderson, Indiana Metropolitan Statistical Area which encompasses Madison County. Anderson is the headquarters of the Church of God (Anderson) and home of Anderson University, which is affiliated with the Christian denomination. Highlights of the city include the historic Paramount Theatre and the Gruenewald Historic House.

Prior to the organization of Madison County, William Conner entered the land upon which Anderson is located. Conner later sold the ground to John and Sarah Berry, who donated 32 acres (129,000 m²) of their land to Madison County on the condition that the county seat be moved from Pendleton to Anderson. John Berry laid out the first plat of Anderson on November 7, 1827. In 1828 the seat of justice was moved from Pendleton to Anderson.

The city is named for Chief William "Adam" Anderson, whose mother was a Delaware Indian and whose father was of Swedish descent. Chief Anderson's Indian name was Kikthawenund meaning "creaking boughs". The Delaware village was known as Anderson's Town, though the Moravian Missionaries called it "The Heathen Town Four Miles Away." Anderson was also known as Andersonton before being formally organized as Anderson.

Introduction of internal improvements by the Mammoth Internal Improvement Act caused a growth in the population in 1837. In December, 1838, Anderson was incorporated as a town with 350 inhabitants. The Central Canal, a branch of the Wabash and Erie Canal, was planned to come through Anderson. Work continued on the canal during 1838 and the beginning of 1839, but work on the canal was soon suspended by the state following the Panic of 1837. The town again became a sleepy village until 1849 when it was incorporated a second time as a town. Many new commercial ventures located around the Courthouse Square.

This incorporation was short-lived and Anderson once again went back to village status in 1852. However, with the completion of the Indianapolis Bellefontaine Railroad, as well as their station in 1852, Anderson burst to life. The third incorporation of Anderson as a town occurred on June 9, 1853. The population continued to increase. On August 28, 1865, with a population was nearly 1,300 people, Anderson was incorporated as a city. 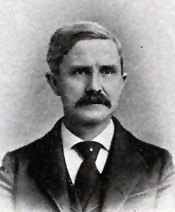 Between 1853 and the late 19th century, twenty industries of various sizes located there. On March 31, 1887, natural gas was discovered in Anderson. As the Indiana Gas Boom began, this discovery led new businesses that could use natural gas, such as glass-making, to move to the city. Anderson grew to such proportions that a Cincinnati newspaper editor labeled the city "The Pittsburgh on White River." Other appellations were "Queen City of the Gas Belt" and (because of the vulcanizing and the rubber tire manufacturing business) "Puncture Proof City."

In 1897 the Interurban Railroad was born in Anderson. Charles Henry, a large stock holder, coined the term "Interurban" in 1893. It continued to operate until 1941. The year 1912 spelled disaster for Anderson: the natural gas ran out, due to the residents squandering their resources. The city left its gas powered lights on day and night, and there are stories of a pocket of natural gas being lit in the river and burning for a prolonged period for the spectacle of it. The result of the loss of natural gas was that several factories moved out. The whole city slowed down. The Commercial Club (formed on November 18, 1905) was the forerunner of the present chamber of commerce.

This club persuaded the Remy brothers to stay in Anderson and others to locate there. For decades, Delco Remy and Guide Lamp, during World War II built the M3, M3a1 submachine gun and the liberator pistol for the allies, (later Fisher Guide) were the top two employers in the city. From 1913 through the 1950s, the Ward-Stilson Company was one of the country's largest producers of uniforms, regalia, furniture and props for the Freemasons, the Odd Fellows and dozens of other U.S. fraternal organizations.

Of the extant households 28.8% had children under the age of 18 living with them, 35.8% were married couples living together, 17.1% had a female householder with no husband present, 5.5% had a male householder with no wife present, and 41.6% were non-families. 34.5% of all households were made up of individuals, and 13.8% had someone living alone who was 65 years of age or older. The average household size was 2.28 and the average family size was 2.91. 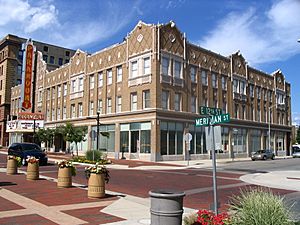 In the comic strip Peanuts, a book in the fictional series beloved by Snoopy, "The Six Bunny Wunnies", is called The Six Bunnie-Wunnies and Their Layover in Anderson, Indiana. (Charles Schulz had been recently awarded an honorary degree by Anderson College.)

Anderson is the home of several characters in the alternate history novel The Man with the Iron Heart by Harry Turtledove.

When General Motors closed its operations in Anderson, the city was dealt a major economic blow as GM was the biggest employer in Anderson. Nevertheless, in 2007, Anderson was ranked 98th in the Forbes List for 100 Best Places for Businesses among Smaller U.S. Metro areas. However, a more recent (2014) appraisal of Anderson from the Indiana Business Review was mixed noting that "long-term trends are negative", citing "a long-term downward trend in area employment" and "acceleration in the number of food stamp recipients". More recent unemployment has been reduced, but improvements still lag behind the rest of the state.

For 2013, estimated household median income was $33,574 (vs. Indiana state median of $48,248). Per capita money income was $18,216 (Indiana per capita of $24,635). 25.8% of the city's population was estimated at living below poverty level, vs. a statewide estimation of 15.4%. Madison County, of which Anderson is the seat, has nearly three times as many food stamps recipients per capita as does Indiana as a whole.

As of February 2019, the ten largest employers in Madison County were:

Anderson University and Ivy Tech Community College of Indiana are also located within the city.

The city has a lending library, the Anderson Public Library.

All content from Kiddle encyclopedia articles (including the article images and facts) can be freely used under Attribution-ShareAlike license, unless stated otherwise. Cite this article:
Anderson, Indiana Facts for Kids. Kiddle Encyclopedia.