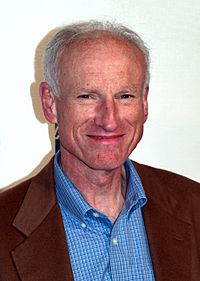 James Robert Rebhorn (September 1, 1948 – March 21, 2014) was an American character actor. He appeared in over one hundred television shows, movies, and plays. He was best known for his roles in the movies Scent of a Woman (1992) and Independence Day (1996) and for his role as Frank Mathison in the television show Homeland. He was born in Philadelphia, Pennsylvania. He moved to Anderson, Indiana during his childhood.

Rebhorn died after a long battle with melanoma on March 21, 2014 in South Orange, New Jersey. He was 65 years old.

All content from Kiddle encyclopedia articles (including the article images and facts) can be freely used under Attribution-ShareAlike license, unless stated otherwise. Cite this article:
James Rebhorn Facts for Kids. Kiddle Encyclopedia.