The Tower Hotel is a historic hotel building located on the northeast corner of Eleventh and Jackson Streets in downtown Anderson, Indiana, United States. 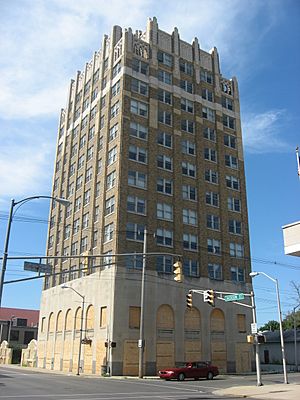 The name of the building is somewhat of a misnomer as the building never actually functioned as a hotel. If the hotel had opened it would have been part of the Pick-Wenzel chain. The hotel was to feature a complete bakery, a barber shop, a banquet hall, a business center, a large lobby and dining room. The depression struck, the building was up, but the interiors were not completed.

The building stood empty for many years, until the Gospel Trumpet bought the building and converted it into apartments.

In late 2011, the owners of the Tower Hotel (then known as Tower Place) were forced to close when maintenance and operation costs became too much to bear. The building sat with its first two levels covered in plywood until February 2013, when it was announced the building would be sold via auction. Initial estimates had the building going for between $200,000 and $250,000. An open house was held the week before the auction to proved potential buyers with a chance to tour the building before bidding.

On February 20, 2013, The Tower Hotel was purchased by Russian-born business owner, Youri Frankine for $100,000. In his own words, "I like the property. I want to make it just like it was,”. As for the Tower's interior, Mr Frankine said, “I want the apartments to be nice, something to reflect the historic outside look of the building." He hopes the project will revitalize Anderson's downtown.

All content from Kiddle encyclopedia articles (including the article images and facts) can be freely used under Attribution-ShareAlike license, unless stated otherwise. Cite this article:
Tower Hotel (Anderson, Indiana) Facts for Kids. Kiddle Encyclopedia.