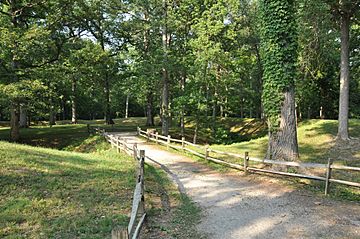 The largest earthwork, the "Great Mound", is believed to have been constructed around 160 BCE. The Great Mound is a circular earth enclosure with an internal ditch and south to southwest entrance. The earthworks measure 394 feet (120.1 m) across from bank to bank. The 9-foot-tall (3 m) embankment is 63 feet (19 m) wide at its base, and the ditch is 10.5 feet (3.2 m) deep and 60 feet (18.3 m) across at its top. The central platform is 138 feet (42 m) across and was occupied by a 4-foot-high (1.2 m) central mound 30 feet (9 m) in diameter. One particular mound at the Anderson Site has a sequence of clay platforms, each deliberately covered by a layer of ash.

The term Earthworks includes any structure made from the earth. In Native American studies, there are three primary types: mounds, circular enclosures, and complexes. All are found in Central Indiana and in the state park. Mounds State Park has a complex of enclosures, both circular and rectangular. There are seven enclosures and four additional earthworks, which have been divided into two groups, the northern complex and the southern complex. The ‘’Great Mound" enclosure is the dominant structure in the park and the southern group. 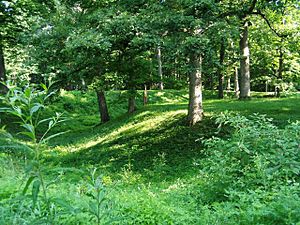 The complex has been dated to 160 BCE through 50 CE These dates are obtained through radiocarbon dating and some artifacts. A nearby log tomb was found with a platform pipe typical of Hopewell styles from 50 C.E. Post hole remnants were dated to 60 BCE and 230 CE. Radiocarbon dates from excavated material of the Great Mound established 160 BCE +/- 90 for the embankment. The neighboring ‘’Fiddleback" Mound was dated to 120 BCE +/- 70.

All content from Kiddle encyclopedia articles (including the article images and facts) can be freely used under Attribution-ShareAlike license, unless stated otherwise. Cite this article:
Mounds State Park Facts for Kids. Kiddle Encyclopedia.