Pendleton is a town in Fall Creek Township, Madison County, Indiana, United States. It is part of the Anderson, Indiana Metropolitan Statistical Area. The population was 4,253 at the 2010 census.

Pendleton was platted in 1830, and incorporated as a town in 1854. It was named for town founder Thomas Pendleton. 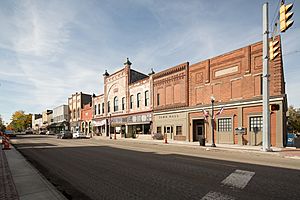 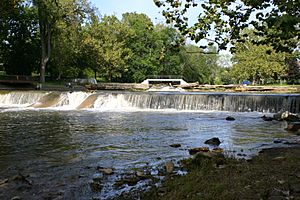 There were 1,754 households of which 34.9% had children under the age of 18 living with them, 47.4% were married couples living together, 13.7% had a female householder with no husband present, 4.7% had a male householder with no wife present, and 34.2% were non-families. 30.4% of all households were made up of individuals and 12.8% had someone living alone who was 65 years of age or older. The average household size was 2.37 and the average family size was 2.94.

There were 1,550 households out of which 34.6% had children under the age of 18 living with them, 53.3% were married couples living together, 10.8% had a female householder with no husband present, and 32.1% were non-families. 27.9% of all households were made up of individuals and 11.6% had someone living alone who was 65 years of age or older. The average household size was 2.41 and the average family size was 2.94.

The Pendleton Historic District, a U.S. Registered Historic District covers an area roughly bounded by Fall Creek, the Conrail right-of-way, Madison and Adams Sts. It is listed on the National Register of Historic Places along with Madison County Bridge No. 149.

According to the Indiana EMS commission, Pendleton Emergency Ambulance operates one of only two volunteer Advanced Life Support (ALS) ambulance services in Indiana.

Three facilities of the Indiana Department of Corrections are in Fall Creek Township, near Pendleton

The Pendleton Correctional Facility is located on the south edge of town. Famous former inmates include: John Dillinger, Harry Pierpont, Jim (Goose)Ligon and Homer Van Meter. The Pendleton Reformatory is a maximum security prison and is located at 4490 Reformatory Rd.

The Fall Creek Massacre is the name given to the brutal murders of a peaceful group of Seneca and Miami Indians by white settlers. The actual massacre occurred on March 22, 1824 in Madison County, Indiana between Fall Creek and Deer Lick Creek. James Hudson's trial was held October 7–9, 1824. Trials of the other men were held in 1825. The trial set an important precedent in recognizing the civil rights of Native Americans. The three men were hanged for their crimes at Falls Park in Pendleton. This marked the first time white men were executed for the murder of Native Americans in the United States. There is a historical marker in Falls Park at the place of the hanging. The inscription reads: "Three white men were hung [sic] here in 1825 for killing Indians."

Abolitionist Frederick Douglass was attacked by a mob in 1843 while attempting to deliver a lecture in Pendleton. Douglass was knocked unconscious and his hand was broken. Douglass described the attack as follows: "Pendleton this mobocratic spirit was even more pronounced. It was found impossible to obtain a building in which to hold our convention, and our friends, Dr. Fussell and others, erected a platform in the woods, where quite a large audience assembled. Mr. Bradburn, Mr. White, and myself were in attendance. As soon as we began to speak a mob of about sixty of the roughest characters I ever looked upon ordered us, through its leaders, to "be silent," threatening us, if we were not, with violence. We attempted to dissuade them, but they had not come to parley but to fight, and were well armed. They tore down the platform on which we stood, assaulted Mr. White and knocking out several of his teeth, dealt a heavy blow on William A. White, striking him on the back part of the head, badly cutting his scalp and felling him to the ground. Undertaking to fight my way through the crowd with a stick which I caught up in the mêlée, I attracted the fury of the mob, which laid me prostrate on the ground under a torrent of blows. Leaving me thus, with my right hand broken, and in a state of unconsciousness, the mobocrats hastily mounted their horses and rode to Andersonville, where most of them resided. I was soon raised up and revived by Neal Hardy, a kind-hearted member of the Society of Friends, and carried by him in his wagon about three miles (5 km) in the country to his home, where I was tenderly nursed and bandaged by good Mrs. Hardy till I was again on my feet, but as the bones broken were not properly set my hand has never recovered its natural strength and dexterity. We lingered long in Indiana, and the good effects of our labors there are felt at this day. I have lately visited Pendleton, now one of the best republican towns in the State, and looked again upon the spot where I was beaten down, and have again taken by the hand some of the witnesses of that scene, amongst whom was the kind, good lady—Mrs. Hardy—who, so like the good Samaritan of old, bound up my wounds, and cared for me so kindly."

All content from Kiddle encyclopedia articles (including the article images and facts) can be freely used under Attribution-ShareAlike license, unless stated otherwise. Cite this article:
Pendleton, Indiana Facts for Kids. Kiddle Encyclopedia.