Greenfield is a city in and the county seat of Hancock County, Indiana, United States, and a part of the Indianapolis metropolitan area. The population was 20,602 at the 2010 census. It lies in Center Township.

Hancock County was created on March 1, 1828, and named for John Hancock, the first person to sign the Declaration of Independence. The town of Greenfield was chosen as the county seat on April 11, 1828. The Commissioners announced, "The seat of Justice of Hancock County shall be known and designated by the name and title of Greenfield." The population of the county at that time was 400.

Early settlers built along the two creeks which flow south through Center Township, which includes Greenfield. The first businesses were small grist mills for grinding corn and wheat for settlers.

U.S. Route 40, the National Road, was built through Hancock County around 1835. It was heavily traveled by wagon trains going west and livestock going to Cincinnati. In 1853, the first steam railroad was completed by the Indiana Central Railroad at the south edge of Greenfield. The railroad became part of the Pennsylvania Railroad System and later the Penn-Central. These tracks were removed in the 1980s.

During this time, Greenfield's population continued to grow. Greenfield was incorporated as a city in 1876 with a population of 2,023. The greatest single period of growth began in 1887 when natural gas was discovered in the area. Greenfield was a boom town for 20 years, with the founding of manufacturing plants and other industries.

A statue of James Whitcomb Riley, which stands in front of the Hancock County Courthouse, was erected in 1918. It was purchased with money donated by school children from all over the United States. Each year, during the Riley Festival in October, the city's school children parade to the statue to place flowers around it.

Located on the east side of historic downtown lies Riley Park, in which flows the Brandywine River.

There were 7,983 households of which 36.8% had children under the age of 18 living with them, 49.2% were married couples living together, 12.8% had a female householder with no husband present, 5.4% had a male householder with no wife present, and 32.6% were non-families. 26.8% of all households were made up of individuals and 10.8% had someone living alone who was 65 years of age or older. The average household size was 2.51 and the average family size was 3.04.

There were 5,917 households out of which 32.8% had children under the age of 18 living with them, 53.4% were married couples living together, 10.7% had a female householder with no husband present, and 32.1% were non-families. 27.4% of all households were made up of individuals and 10.9% had someone living alone who was 65 years of age or older. The average household size was 2.41 and the average family size was 2.93. 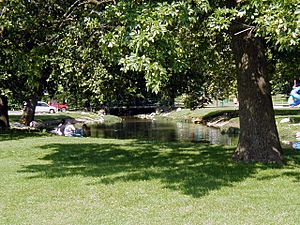 "The Old Swimming Hole" that appears in James Whitcomb Riley's poems is now a large and well-used park on the east side of Greenfield. 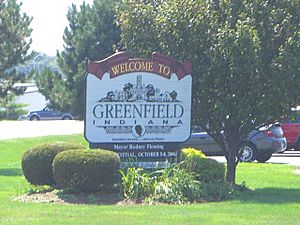 Greenfield is currently in a sister city relationship with Kakuda, Miyagi Prefecture, Japan. Each year, a small group of high school students from Greenfield and Kakuda are chosen to travel to each sister city, respectively, and will stay with a host family for ten days, most expenses paid, thanks to local donations. The sister city program began in 1990 and continues today.

Each year in October, the city of Greenfield hosts the Riley Festival which is commonly known as Riley Days. The intersections of State Road 9 and US 40 are closed and the downtown courthouse square is filled with vendors and exhibitors.

All content from Kiddle encyclopedia articles (including the article images and facts) can be freely used under Attribution-ShareAlike license, unless stated otherwise. Cite this article:
Greenfield, Indiana Facts for Kids. Kiddle Encyclopedia.