New Castle is a city in Henry County, Indiana, 44 miles (71 km) east-northeast of Indianapolis, on the Big Blue River. The city is the county seat of Henry County. New Castle is home to New Castle Fieldhouse, the largest high school gymnasium in the world. The city is surrounded by agricultural land. In the past, it was a manufacturing center for the production of sheet iron and steel, automobiles, caskets, clothing, scales, bridges, pianos, furniture, handles, shovels, lathes, bricks, and flour. Starting in the early 20th century, it was known as the Rose City, at one point having 100 florists and numerous growers.

New Castle Correctional Facility, with a capacity of over 3,500 inmates, is located just north of the city.

New Castle was platted in 1823, and named after New Castle, Kentucky. A post office was established at New Castle in 1823. The Maxwell Automobile Factory, later owned and operated by Chrysler Motor Corp. was, at the time of construction in the first part of the 20th century, the largest automotive manufacturing plant in the world. 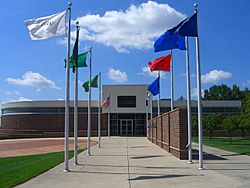 Climate is designated as Humid continental, and this region typically has large seasonal temperature differences, with warm to hot (and often humid) summers and cold (sometimes severely cold) winters. The Köppen Climate Classification subtype for this climate is "Dfa". (Hot Summer Continental Climate).

The city has a public library, the New Castle-Henry County Public Library.

All content from Kiddle encyclopedia articles (including the article images and facts) can be freely used under Attribution-ShareAlike license, unless stated otherwise. Cite this article:
New Castle, Indiana Facts for Kids. Kiddle Encyclopedia.