To Kill a Mockingbird facts for kids 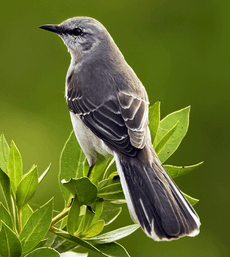 Lee used the mockingbird to symbolize innocence in the novel

To Kill a Mockingbird is an American novel written by Harper Lee. It was published in 1960. The book was a great success. It won the Pulitzer Prize. The book was adapted to a 1962 movie starring Gregory Peck. The movie won three Academy Awards.

Lee based the story and characters on her family and neighbors, and something that happened near her hometown in 1936. This was when she was 10 years old.

To Kill a Mockingbird is a Southern Gothic novel and a bildungsroman (a story where the main character develops and grows). Its main themes are racism and innocence. Lee also writes about bravery, compassion, and gender roles in the American Deep South. The book is taught in many schools in English-speaking countries with lessons about being patient and fair.

It is set during the Great Depression of the 1930s. It was first published in 1960 and made into a movie in 1962. It tells the story of a young girl, Jean Louise Finch, (known as "Scout") and her brother Jeremy Atticus Finch (known as "Jem"). They live in the Southern United States with their father Atticus Finch, who is a lawyer. In the story Atticus defends a black man, Tom Robinson, who has been accused of hurting a white woman.

Harper Lee was born in 1926 and grew up in the Southern town of Monroeville, Alabama. There, she became close friends with Truman Capote, who became a famous writer later. She went to Huntingdon College in Montgomery (1944–45), and then studied law at the University of Alabama (1945–49). When she went to college, she wrote for literary magazines, like Huntress and Rammer Jammer. At both colleges, she wrote short stories and other works about racial unfairness, which was not usually written about in colleges at the time. In 1950, Lee moved to New York City, where she worked as a clerk for British Overseas Airways Corporation. While she was there, she began writing essays and short stories about people in Monroeville. In 1957, Lee showed her writing to a literary agent Capote told her about. An editor at J. B. Lippincott suggested to her that she should stop working at the airline and focus on writing instead. Her friends gave her money to help her continue writing for a year.

Lee spent two and a half years writing To Kill a Mockingbird.

The book follows Jem and Scout, two siblings living in the 1930’s in a small southern town. Their father, Atticus, is a lawyer who is hired to defend a black man who is accused of abusing a white woman. The children watch the town and the trial change and grow. Atticus loses the trial and Tom Robinson, the man who is being accused the abuse gets killed by prison guards. The whole town is in an uproar. Some people are furious, some are pleased, and others see it as no big deal. But for Jem and Scout it is a time for them to grow up and face the harsh realities of racism.

The story happens during three years of the Great Depression in the fictional town of Maycomb, Alabama. The city is in a fictional county of the same name. It is told in the first person by Jean Louise "Scout" Finch. She is six years old; lives with her older brother Jeremy "Jem"; her father Atticus, a lawyer; her mother died when she was young. Jem and Scout become friends with a boy named Charles Baker Harris, nicknamed Dill, who visits Maycomb to stay with his aunt in the summer. The children are interested in their neighbors' (the Radleys) estate. Few people had seen the residents for many years. The children imagine how Boo Radley looks, why he hides in his house, and how to make him come out. After two summers, Scout and Jem find small presents in a tree outside the Radley place. Boo often shows signs of kindness to the children, then meets Scout while protecting her as Bob Ewell tries to kill her and Jem.

All content from Kiddle encyclopedia articles (including the article images and facts) can be freely used under Attribution-ShareAlike license, unless stated otherwise. Cite this article:
To Kill a Mockingbird Facts for Kids. Kiddle Encyclopedia.