Monroe County is a county located in the U.S. state of Indiana, and determined by the U.S. Census Bureau to include the mean center of U.S. population in 1910. The population was 137,974 at the 2010 census. The county seat is Bloomington.

Monroe County was formed in 1818 from portions of Orange County. It was named for James Monroe, fifth President of the United States, who was serving at the time the county was organized. 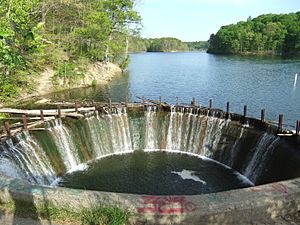 Griffy Lake, seen from its dam

Monroe County is divided between the basins of the East Fork and West Fork of Indiana's White River. The southern part of the county drains to the East Fork, primarily via Salt Creek and its tributaries, such as Clear Creek (known as "Jordan River" on Indiana University Bloomington campus). The northern part drains to the West Fork.

Several artificial reservoirs have been constructed by damming the county's creeks. The largest of them is Lake Monroe, a large reservoir on the Salt Creek in the south-eastern part of the county, is used both for recreational purposes and to supply the city with drinking water. Until the late 1960s, the main source of water supply was the smaller Lake Lemon (constructed 1953), in the northeastern part of the county; now it's the backup water source, and is mainly used for recreation.

The third in order of size is Griffy Lake, on the northern slope of the county. Constructed in 1924 by damming Griffy Creek, it was Bloomington's main water source until 1954; now it is now primarily used recreationally, although there are arrangements for it to be used as an emergency water source as well. An even smaller Weimer (Wapehani) Lake in the Clear Creek basin was originally constructed for water supply purposes as well, but now is used purely for recreation (fishing).

A number of former limestone quarries in the county are now naturally filled with water, as featured in the 1979 film Breaking Away. 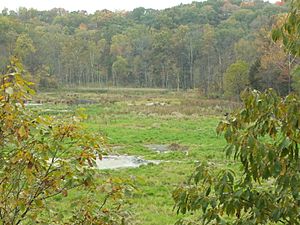 The defunct Leonard Springs Reservoir, now taken over by beavers

Form many years Monroe County was one of the most populous counties in the USA which did not contain any US highways or Interstate highways. However, in December 2015 the I-69 extension was completed into the county and this distinction disappeared.

All content from Kiddle encyclopedia articles (including the article images and facts) can be freely used under Attribution-ShareAlike license, unless stated otherwise. Cite this article:
Monroe County, Indiana Facts for Kids. Kiddle Encyclopedia.