Orange County is located in southern Indiana in the United States. As of 2010, its population was 19,840, an increase of 2.8% from 19,306 in 2000. The county seat is Paoli. The county has four incorporated settlements with a total population of about 8,600, as well as several small unincorporated communities. It is divided into 10 townships which provide local services. One U.S. route and five Indiana state roads pass through or into the county.

Orange County was formed from parts of Knox County, Gibson County and Washington County by an act approved on December 26, 1815; it took effect on February 1, 1816. The same year, the county seat was established in Paoli, which was named after Pasquale Paoli Ash, the 12-year-old son of the Governor, at the time, of North Carolina .

The first courthouse was a temporary log structure that was built for $25; a more permanent structure of stone was completed in 1819 at a cost of $3,950. In 1847, plans were made for a new larger courthouse, which was completed in 1850 at a cost of $14,000. This building is the second oldest courthouse in the state that has been continuously used since its construction. Like the oldest in Ohio County, it is a Greek Revival building with two stories and a Doric portico supported by fluted columns; it has ornamental iron stairs and a clock tower. In 1970, the clock tower was damaged by fire.

The early settlers were mostly Quakers fleeing the institution of slavery in Orange County, North Carolina. Jonathan Lindley brought his group of Quakers from North Carolina to the area in 1811. Under Lindley's leadership, they were the first to build a religious structure, the Lick Creek Meeting House in 1813. It was from this group that Orange County got its name. (See List of Indiana county name etymologies). The name Orange derives from the Dutch Protestant House of Orange, which acquired the English throne with the accession of King William III in 1689, following the Glorious Revolution.

In the early 19th century when the Quakers came from North Carolina to settle in Orange County, Indiana, they came to escape slavery. They brought with them a number of freed slaves. These free men were deeded 200 acres (0.81 km2) of land in the heart of a dense forest. Word of mouth soon spread the news, and this land became part of the "underground railroad" for runaway slaves.

For many years, the freed slaves in this area farmed, traded, and sold their labor to others while living in this settlement. A church was built and a cemetery was provided for their loved ones.

All that remains today is the cemetery. Some of the stones were broken or vandalized over the years. Several years ago, a troop of Boy Scouts came in and restored the cemetery, replacing the lost or broken stones with wooden crosses designating a grave. The name of "Little Africa" came about because of the black settlement, but "Paddy's Garden" was the name those early residents called it. 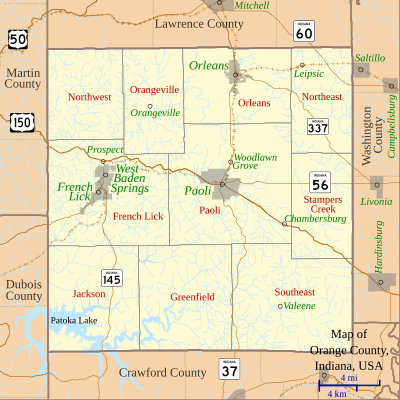 Orange County contains four incorporated settlements. The largest is the county seat of Paoli, which lies near the center of the county. To the north of Paoli lies Orleans. To the west, French Lick and West Baden Springs are connected but are separate entities.

There are several small unincorporated settlements in the county. Chambersburg lies along U.S. Route 150 about 4 miles (6.4 km) southeast of Paoli. To the east of Orleans in the northeast corner of the county is the town of Leipsic. Prospect is on U.S. Route 150 just north of West Baden Springs. Orangeville is northwest of Paoli, near the center of Orangeville Township. In the southeast corner of the county, Valeene lies near the center of Southeast Township.

Much of the south part of the county, south of Paoli and French Lick, is part of the Hoosier National Forest. Patoka Lake is within the national forest; the majority of the lake lies in Orange County, with parts extending into neighboring Dubois and Crawford counties.

The county is divided into 10 townships:

U.S. Route 150 crosses Orange County, entering from Martin County to the west; it passes just to the north of West Baden Springs and on through Paoli, continuing somewhat to the southeast and passing into Washington County and Hardinsburg to the east. 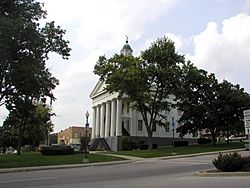 The Orange County Courthouse in the center of the Paoli, Indiana town square

All content from Kiddle encyclopedia articles (including the article images and facts) can be freely used under Attribution-ShareAlike license, unless stated otherwise. Cite this article:
Orange County, Indiana Facts for Kids. Kiddle Encyclopedia.