Gibson County is a county located in the southwestern part of the U.S. state of Indiana. As of 2010, the population was 33,503. The county seat is Princeton.

From 1790 to 1813, this area was part of Knox County, Indiana. The first white settler of what became Gibson County was John Severns, a native of Wales who had come with his parents to North America several years before the Revolutionary War. He settled in Gibson County in 1789-90 on the south bank of the Patoka River at a place now known as Severns Bridge. Another early Gibson County settler was William Hargrove, who came from Kentucky by pack mule in 1803; Captain Hargrove commanded a company of militia from Gibson County at the Battle of Tippecanoe in 1811.

In 1805, Jacob Warrick arrived, along with his father-in-law, Thomas Montgomery. They burned out the last Native American village in 1807, chasing the inhabitants into the Illinois Territory. Captain Warrick was killed at the Battle of Tippecanoe in 1811.

Gibson and Warrick Counties were organized in 1813 out of Knox County. Gibson County was named for John Gibson, an officer in the French and Indian War and the Revolutionary War. Gibson was Secretary of the Indiana Territory, serving as acting Governor on two occasions. The two counties of Gibson County and Warrick County, separated by Rector's Base Line, were formed March 9, 1813 and organized on April 1, 1813. Gibson County occupied everything from the Wabash River and from the White River's extension to the Paoli Base Line down the 2d Principal Meridian to the Rector's Base Line. The area south of this line became Warrick County, which covered the area from the 2d Principal Meridian west to the Wabash River and down the Wabash River and with meanders up the Ohio River back to the 2d Principal Meridian (which had previously separated Knox County from Harrison County, Indiana Territory). Orange County, Spencer County, Pike County, Dubois County, and Crawford County all came from the roughly 2,000-square-mile (5,200 km2) area occupied by the original Gibson County, as well as small portions of Lawrence County, Perry County, Posey County, the current Warrick County, and Vanderburgh County.

When the county was organized, Patoka was initially intended to be the county seat. However, Patoka's low-lying location along the Patoka River gave rise to a malaria epidemic; to avoid this, the commissioners chose to establish a new town, eventually known as Princeton, on higher ground approximately 4 miles (6 km) south. However, although Princeton contends that it was the only county seat, some contend that county records indicate that Owensville was a temporary county seat since Princeton was not even laid out until late 1814, at least a year after Gibson County's organization. 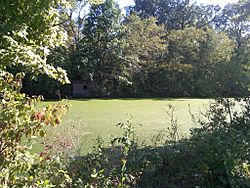 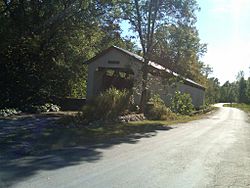 Gibson County is the northern third of the Evansville, Indiana–Kentucky Metropolitan Statistical Area. Nearly 90% of the county exists within the Ohio River Valley American Viticultural Area along with all of neighboring Posey, Vanderburgh and Warrick counties and a portion of Pike County. Despite being close to Evansville and experiencing a large growth of population in the central areas, Gibson County still remains a largely rural county with half of the ten townships having populations less than 2,000. Less than 7 percent of the county's 500 square miles (1,300 km2) lies within incorporated settlements, or 10 percent if subdivisions are included.

The western part of the county consists largely of spread-out flood-prone farms with spotty marshes along the Wabash and White Rivers. There are rolling hills around Owensville, and large forest and marshland tracts lie near the Gibson Generating Station and the three river settlements of Crawleyville, East Mount Carmel, and Skelton. The northern part is near the White River and is more given to hills and forest. The eastern part contains many hills and is also dotted with strip pits and active coal mines. The southern part is more given to valley and marshland, drained by the Pigeon Creek which flows south through Evansville.

Even without Interstate 69, the county is within a day's drive of Chicago, Cincinnati, Chattanooga, Columbus, Indianapolis, Louisville, Memphis, Nashville, Springfield, St. Louis, even South Bend, and Fort Wayne despite the lack of freeway connection. There are two major intersections in the southern extremes of the county. One is the intersection of Interstate 64 and US 41. The other is between Interstate 64 and Interstate 69, which will eventually link the county and Evansville to Indianapolis and Memphis and make a day trip to even Detroit possible.

The western half of the Patoka River National Wildlife Refuge and Management Area lies within Gibson County. 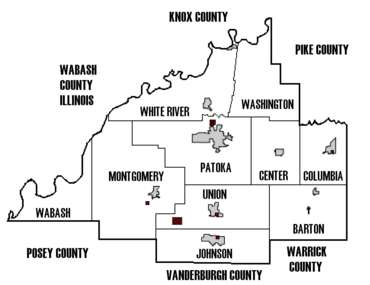 The Townships of Gibson County

* Baldwin Heights and Northbrook Hills are within the city limits of Princeton.

In the holiday season of 2004, a crippling snowstorm dumped over twice the normal annual snowfall in three days. Accumulations averaged 20 inches in Gibson County, with snow drifts reaching over 4 feet (1.2 m) in spots and some spots of Gibson County receiving as much as 32 inches (0.81 m). Interstate 64 was closed down. The Indiana National Guard was dispatched and local farmers were recruited to assist in emergency services for stranded motorists.

The White River at Hazleton got as high as 31 feet (9.4 m), almost high enough to overtake US 41, Extreme flooding occurred throughout the county and hundreds of local high school students from many counties assisted the Indiana National Guard in shoring up levees and sandbagging towns. Hazleton was evacuated because its levee was showing signs of fatigue. All of the levees held. By the end of January 2005, the rivers had receded enough to allow people to return to their homes. Over 100 homes were lost in the flood, which was considered the second-worst flood in the area's history (after the Great Flood of 1913).

A major flood occurred in June 2008. It was caused by intense rainfall and the source of the flood was entirely upstream. Both the Wabash and White Rivers were severely flooded and nearly all of Gibson County's levees held the flood back, while many levees upstream were failing.

On the evening of February 28, 2017, a powerful and extremely violent EF3 tornado struck areas of southern Illinois and Southwest Indiana, the tornado began near Crossville, IL where it caused one death, the tornado then continued northeast, crossing the Wabash River into Posey County, IN where it caused mainly tree and relatively minor structure damage, the tornado then continued it's track east-northeast into southern Gibson County where the most intense damage occurred just north of the Posey County line, 2 people received minor injuries there, the tornado continued, causing damage along the way, until ending near Oakland City, IN after tracking 44 miles. 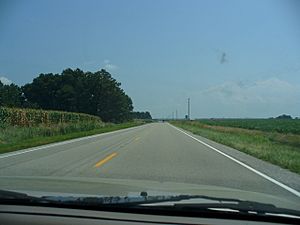 Indiana 168 between Owensville and Fort Branch.

Gibson County has over 1,700 miles (2,700 km) of county roads, one of the largest amounts of county-maintained roads outside of an urban county. Like most Indiana counties, Gibson County uses the Indiana county road system to identify its roads. U.S. Route 41 (a north-south road) and State Road 64 (an east-west road) are near the meridian and division lines for the county, respectively. 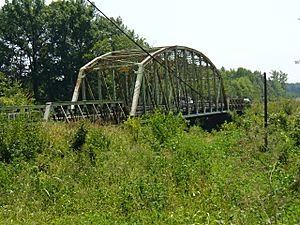 Little Bridge near east Mount Carmel at the western terminus of SR 64. Also known as "The Little Monster" because of the many accidents there, it, like the main bridge, was built to the width standards of the 1930s. It was replaced by a new bridge in 2010. The grassy area in the foreground is now occupied by the new road and bridge.

A section of Interstate 69's construction groundbreaking occurred on July 16, 2008, at the Centre in Evansville. This project has its controversy, highlighted by a group of protesters in attendance.

A portion of the first segment opened in late September 2009.

All content from Kiddle encyclopedia articles (including the article images and facts) can be freely used under Attribution-ShareAlike license, unless stated otherwise. Cite this article:
Gibson County, Indiana Facts for Kids. Kiddle Encyclopedia.