Owensville is the third largest town and the smallest of the five larger communities in Gibson County, Indiana, United States. The population was 1,330 in 2017.

Owensville was established in 1817 by Phillip Briscoe, when he filed the town plat consisting of fifty two parcels and five out-parcels. A fire in 1876 destroyed many of the wood framed businesses on the eastern side of the town square. It was not until 1881 that Owensville incorporated.

On February 28, 2017, an EF3 wedge tornado, originating in Crossville, Illinois, passed to the south of the town, destroying or heavily damaging several structures along Indiana 65. The highway was closed for several days as power crews replaced several large power poles.

The climate in this area is characterized by hot, humid summers and generally mild to cool winters. According to the Köppen Climate Classification system, Owensville has a humid subtropical climate, abbreviated "Cfa" on climate maps, although areas just north of town have a humid continental climate.

There were 510 households, of which 33.1% had children under the age of 18 living with them, 48.8% were married couples living together, 12.9% had a female householder with no husband present, 4.3% had a male householder with no wife present, and 33.9% were non-families. 29.0% of all households were made up of individuals, and 15.7% had someone living alone who was 65 years of age or older. The average household size was 2.41 and the average family size was 2.97.

Unlike Princeton and Fort Branch, Owensville's economy practically consists of a scant few family-owned business with only three exceptions: Goodlettsville, Tennessee-based Dollar General, Mount Carmel, Illinois-based Community Natural Gas, and Mount Vernon, Indiana-based Schultheis Insurance. The largest family-owned businesses in Owensville are Holder's Furniture and Holders Funeral Home (not owned by the same family). However, like Fort Branch, Owensville is largely surrounded by unincorporated subdivisions, primarily north of the town. The two largest employers of Owensville's residents are the Toyota Motor Manufacturing Indiana plant located halfway between Princeton and Fort Branch, as well as Gibson Generating Station located 5.5 miles north-northwest of Owensville, as well two coal mines that opened up in 2008 and 2014, located 6 miles and 1 mile north of town respectively.

Like the other communities in Gibson County, Owensville's prime economy is based on agriculture. The farms immediately around the town primarily produce corn, soybeans, strawberries, and wheat. Like many other communities along the Lower Wabash Valley, the surrounding Montgomery Township is particularly known for its watermelons, pumpkins, squash, cantaloupes, and zucchini, all heavily produced in the sandy bottom grounds located from the north to the southwest of the town. In addition, milo tends to be produced in place of corn in areas prone to flooding from the Wabash, Patoka, or Black Rivers or any of the other smaller creeks or streams that flow into them.

Owensville High School, which merged with Fort Branch and Haubstadt high schools to form Gibson Southern, had the first high school gymnasium in Indiana with a glass backboard. One of those backboards is now in the Indiana High School Basketball Hall of Fame in New Castle, Indiana. 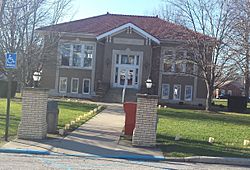 The town has a lending library, the Owensville Carnegie Public Library.

All content from Kiddle encyclopedia articles (including the article images and facts) can be freely used under Attribution-ShareAlike license, unless stated otherwise. Cite this article:
Owensville, Indiana Facts for Kids. Kiddle Encyclopedia.