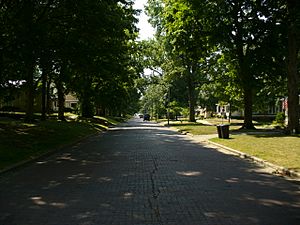 Cherry St. in Mount Carmel, still paved in brick, is home to many interesting examples of around the start of the 20th century architecture

Wabash County is a county located in the U.S. state of Illinois. According to the 2010 census, it had a population of 11,947. Its county seat is Mount Carmel. It is located in the southern portion of Illinois known locally as "Little Egypt".

Wabash County was formed in 1824 out of Edwards County, to avert an armed confrontation between the militias of Albion and Mt. Carmel after the county seat was moved from a town near the current city of Mount Carmel to Albion.

The County is named for the Wabash River, which forms its eastern and southern borders. The name "Wabash" is an English spelling of the French name for the river, "Ouabache." French traders named the river after the Miami Indian word for the river, "Wabashike," (pronounced "Wah-bah-she-keh"), the word for "pure white." Much of the river bottom is white limestone, now obscured by mud.

A 329 acres (1.33 km2) remnant of the county's original Eastern Woodlands ecosystem can be found in the Forest of the Wabash located within the county's Beall Woods State Park.

In the 1920s there existed a famous hotel and resort that existed in Wabash County nearby the Grand Rapids Dam on the Wabash River. The hotel was named the Grand Rapids Hotel and was owned by Frederick Hinde Zimmerman. During the hotel's nine-year existence it catered to individuals from all over the United States. In July 2011, John Matthew Nolan wrote a detailed history of the Grand Rapids Hotel.

On the morning of April 18, 2008, at 4:37am local time, one of the largest earthquakes in Illinois history hit the area. The epicenter of this tremor was in Lick Prairie Township, near the middle of the county. The tremor was felt more than 400 miles away in Nebraska.

Wabash County is one of 17 Illinois counties that use the term precinct. 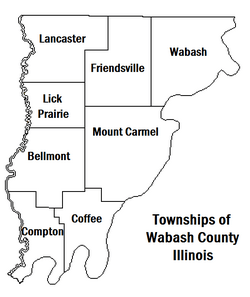 Wabash County precincts and their boundaries

All content from Kiddle encyclopedia articles (including the article images and facts) can be freely used under Attribution-ShareAlike license, unless stated otherwise. Cite this article:
Wabash County, Illinois Facts for Kids. Kiddle Encyclopedia.