Edwards County is a county located in the U.S. state of Illinois. As of the 2010 census, the population was 6,721. Its county seat is Albion. It is located in the southern portion known locally as "Little Egypt".

Edwards County was named for Ninian Edwards, the governor of the Illinois Territory, and, later, governor of Illinois.

Edwards County is subdivided into "Road Districts", rather than "Townships" as in most Illinois counties. Pursuant to the Land Ordinance of 1785, the Northwest Territory (including Illinois) was surveyed and mostly organized into townships that are six miles square; but Edwards County was settled prior to that survey, and its pre-existing Road Districts do not generally correspond with the survey's townships.

When Edwards County was formed in 1814, it comprised nearly half of the State of Illinois. New counties were formed from it until, in 1824, it assumed its present form from the creation of Wabash County. The two are the fourth and fifth smallest counties in Illinois. 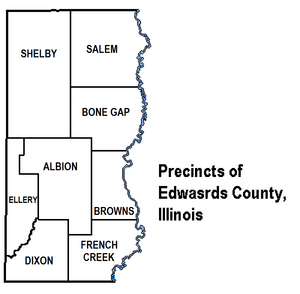 All content from Kiddle encyclopedia articles (including the article images and facts) can be freely used under Attribution-ShareAlike license, unless stated otherwise. Cite this article:
Edwards County, Illinois Facts for Kids. Kiddle Encyclopedia.