Francisco is a town in Center Township, Gibson County, Indiana, United States. The population was 469 at the 2010 census. It was founded in 1851. Local tradition says the town was named for its first settler, a Spanish laborer working on the Wabash and Erie Canal who built a shack in the area. It is part of the Evansville, Indiana, Metropolitan Area. 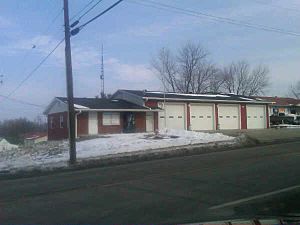 Francisco is located on State Highway 64 between Princeton and Oakland City.

There were 189 households of which 30.7% had children under the age of 18 living with them, 52.4% were married couples living together, 5.8% had a female householder with no husband present, 4.8% had a male householder with no wife present, and 37.0% were non-families. 31.2% of all households were made up of individuals and 17% had someone living alone who was 65 years of age or older. The average household size was 2.48 and the average family size was 3.18.

There were 233 households out of which 29.2% had children under the age of 18 living with them, 50.2% were married couples living together, 9.4% had a female householder with no husband present, and 35.2% were non-families. 30.9% of all households were made up of individuals and 15.0% had someone living alone who was 65 years of age or older. The average household size was 2.33 and the average family size was 2.90. 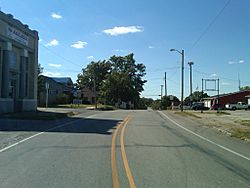 Francisco, 2010. (The tree is the same one in the center of the earlier photo above.)

The town was platted and laid out on the east side of the Wabash and Erie Canal by John Perkins in 1851. Francisco was incorporated in 1907 and the Francisco State Bank chartered a year later. Its heydey was in the mid-1850s during use of the ill-fated canal to ship goods and produce south to Evansville. Mills, grain warehouses and packing establishments thrived during the decade. Remnants of the old canal are still visible just south of Highway 64 and west of town.

Francisco Town Hall is located at 203 West Main St/SR64 with the Fire Department.

Meetings are held the second Tuesday of every month. Wastewater meetings begin at 5:30p followed by Water & Town Business.

Francisco was a town built on the East Banks of the Wabash and Erie Canal. The Manmade Canal ran from Lake Erie in Ohio to the Ohio River at Evansville. Francisco was home to many Rowdy Irishmen who came to help build the canal. The Heyday for the Wabash & Erie Canal was mid-1850s and the canal was closed to traffic around 1870.

A large outbreak of cholera broke out among canal workers near Francisco around 1852; as many as 100 workers died and many more fled from the area. Those who stayed and survived were assigned the task of burying the dead. Many were buried along the banks in long trenches, while others were burnt in piles on the floor of small shanties along the canal.

Drinking establishments or Doggeries were popular among canal workers and in that day were very prominent around Francisco. Whiskey was supplied by "Jigger Bosses" to workers four times a day and caused many fights among the Irish and Americans. The Irish were generally assigned to digging with shovels, while Americans built culverts and bridges.

All content from Kiddle encyclopedia articles (including the article images and facts) can be freely used under Attribution-ShareAlike license, unless stated otherwise. Cite this article:
Francisco, Indiana Facts for Kids. Kiddle Encyclopedia.