Haubstadt is the second largest town, after Fort Branch, and fourth largest community in Gibson County, Indiana, United States. The population was 1,577 at the 2010 census. Haubstadt has recently become a bedroom community of Evansville and such, is part of the Evansville, Indiana, Metropolitan Area.

Haubstadt has several schools, including Haubstadt Community School (or HCS), Saints Peter and Paul (or Sts. P&P), and Saint James. 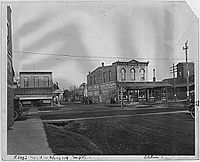 There were 667 households, of which 29.1% had children under the age of 18 living with them, 52.5% were married couples living together, 6.9% had a female householder with no husband present, 5.2% had a male householder with no wife present, and 35.4% were non-families. 31.3% of all households were made up of individuals, and 13.2% had someone living alone who was 65 years of age or older. The average household size was 2.35 and the average family size was 2.96.

Haubstadt was originally called Haub's Station, and under the latter name was laid out in 1855. Named after an early settler, Henry Haub, the town was incorporated in 1913.

Haub built the community's first home, combining a stagecoach shop, general store, and trading post to accommodate travelers on the Noon Day Stage Coach route running to Vincennes. A dance hall was later also built above Mr. Haub's tavern and store, and the complex would later become known as The Log Inn, the area's famous restaurant. The Log Inn is officially recognized as the oldest restaurant in Indiana.

The Haubstadt State Bank (now Town Hall) was listed on the National Register of Historic Places in 1984.

On June 14, 1990, a train, operated by Jacksonville, Florida-based CSX Transportation, was coming into Haubstadt from the south and around 7:00pm suddenly there was a large crash followed by a lightning-like flash from an electric pole accompanied by a thunderclap and a town-wide power failure. It did not take long for people to realize that a train had de-railed. In the derailment, at least five buildings, most of downtown and much of Haubstadt's history was destroyed in about ten seconds. When it was later learned the train was possibly carrying ammonia, Haubstadt was mostly evacuated, mainly by people with respiratory illnesses such as asthma. It was later found that the ammonia cars were empty and that the smell was residue that was released into the air. It was also discovered that the tracks had not been maintained properly and that a couple of loose ties coupled with the speed at which the trains move through Haubstadt and neighboring Fort Branch (between 55 - 65 mph) were to blame for the accident. There is fear among many in Haubstadt and nearby Fort Branch and Princeton that a worse train wreck may occur as the track's speed limit was increased to 70 mph from Princeton to Darmstadt in 2000.

Tri-State Speedway, a 1/4 mile dirt oval racing track, was opened in 1957, roughly 1 mile east of town, and is host to World of Outlaws and USAC National Sprint Car Championship racing.

Haubstadt has a public library, a branch of the Fort Branch-Johnson Township Public Library system.

All content from Kiddle encyclopedia articles (including the article images and facts) can be freely used under Attribution-ShareAlike license, unless stated otherwise. Cite this article:
Haubstadt, Indiana Facts for Kids. Kiddle Encyclopedia.