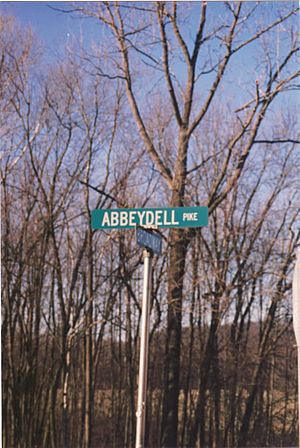 Abydel is an unincorporated community in Orange County, in the U.S. state of Indiana.

A post office was established at Abydel in 1889, and remained in operation until 1907. According to Ronald L. Baker, the community may be named for a woman (Abbey Dell). The precise spelling of the community's name is a subject of disagreement among locals with the variants Abbey Dell, Abby Dell, Abbydel, Abbeydel, Abydel, and Abeydell all used. Although "Abydel" is often the most prevalent name used in county, state, and federal government records and on maps, longtime residents and local government most often use "Abbeydell" as the preferred spelling.

All content from Kiddle encyclopedia articles (including the article images and facts) can be freely used under Attribution-ShareAlike license, unless stated otherwise. Cite this article:
Abydel, Indiana Facts for Kids. Kiddle Encyclopedia.