Grant County is a county located in the U.S. state of Indiana. At the time of the 2010 census, the population was 70,061. The county seat is Marion. Important paleontological discoveries, dating from the Pliocene epoch, have been made at the Pipe Creek Sinkhole in Grant County.

Grant County was formed in 1831. It was named for Captains Samuel and Moses Grant of Kentucky.

In 1831, Martin Boots and David Branson each donated 30 acres of land to begin a settlement called Marion. This land was on the north side of a fast-flowing and scenic river the Miami Indians called Mississinewa -"laughing Waters." Thus Grant County was formed with Marion as the County Seat. http://grantcounty.com/about-gc/history/ 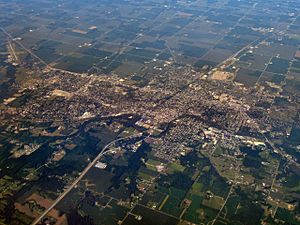 Marion from the air.

All content from Kiddle encyclopedia articles (including the article images and facts) can be freely used under Attribution-ShareAlike license, unless stated otherwise. Cite this article:
Grant County, Indiana Facts for Kids. Kiddle Encyclopedia.