Fairmount is a town in Fairmount Township, Grant County in the east central part of the U.S. state of Indiana. The population was 2,954 at the 2010 census. It is ninety kilometers (fifty-five miles) northeast of Indianapolis. Largely a bedroom community to its three thousand citizens, Fairmount is best known as the boyhood home of actor James Dean, who is buried there. 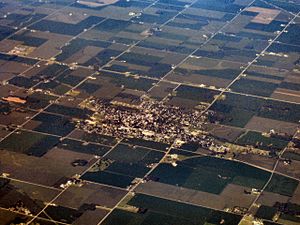 Fairmount from the air, looking southwest

There were 1,241 households of which 31.2% had children under the age of 18 living with them, 48.6% were married couples living together, 14.1% had a female householder with no husband present, 4.8% had a male householder with no wife present, and 32.6% were non-families. 28.0% of all households were made up of individuals and 12% had someone living alone who was 65 years of age or older. The average household size was 2.38 and the average family size was 2.85.

There were 1,226 households out of which 31.2% had children under the age of 18 living with them, 55.5% were married couples living together, 11.0% had a female householder with no husband present, and 29.9% were non-families. 26.5% of all households were made up of individuals and 12.5% had someone living alone who was 65 years of age or older. The average household size was 2.44 and the average family size was 2.91.

The Fairmount area was settled in the 1830s mostly by Quakers from North Carolina. The town was laid out in 1850 and named for Fairmount Park in Philadelphia; it was formally incorporated in 1870.

After a large deposit of natural gas was found in 1887, Fairmount became part of the Indiana Gas Boom and a center of the glass industry for the rest of the 19th century. Shortly after the depletion of the gas in 1900 the automobile industry set up factories in the nearby large cities, and Fairmount became a bedroom community, restoring some of its lost prosperity. 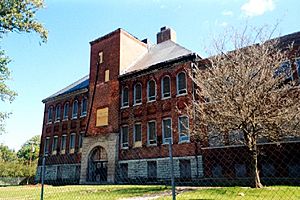 In the 1940s, James Dean lived with an aunt and uncle, Ortense and Marcus Winslow on a farm north of Fairmount. He attended Fairmount High School, graduating in 1949. After his death in 1955, Dean was buried in Park Cemetery. In 1996, a small Memorial Park north of the town's business district was dedicated in his memory with a bronze bust by Hollywood artist Kenneth Kendall.

During the prosperity of the 1960s, Fairmount enjoyed a time of building with a new town hall, water works, post office and elementary school. At the end of the decade the local school district merged with a neighboring one, forming the Madison-Grant united school district. A new high school was built for this district, and Fairmount High School became a middle school. When a new junior high school was opened in 1986, the Fairmount High School building was permanently closed.

Fairmount was hit hard by the recession of 1980–1982, which brought the permanent loss of factory jobs and the failure of many farms, but rebounded later in the decade. Fairmount is still relatively prosperous despite the ill fortunes of nearby industrial cities and a steady loss of population.

In September 1988, The James Dean Gallery opened in a restored Victorian House on North Main Street. Over the years the Museum Exhibit has been toured by nearly 200,000 visitors who come from around the world to visit the hometown of James Dean. Also in 1988, English musician Morrissey filmed the music video for his single Suedehead; a song inspired by his lifelong admiration of Dean, in the town.

On September 30 of each year there is a Memorial Service for James Dean at The Back Creek Friends Church, south of The Winslow Farm.

All content from Kiddle encyclopedia articles (including the article images and facts) can be freely used under Attribution-ShareAlike license, unless stated otherwise. Cite this article:
Fairmount, Indiana Facts for Kids. Kiddle Encyclopedia.