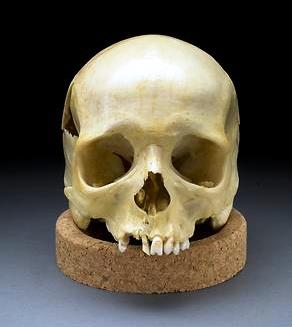 A Caucasoid female skull (National Museum of Health and Medicine).

The Caucasian race (also Caucasoid, or Europid) is a grouping of human beings historically regarded as a biological taxon, which, depending on which of the historical race classifications used, have usually included some or all of the ancient and modern populations of Europe, the Caucasus, Asia Minor, North Africa, the Horn of Africa, Western Asia, Central Asia and South Asia.

In biological anthropology, Caucasoid has been used as an umbrella term for phenotypically similar groups from these different regions, with a focus on skeletal anatomy, and especially cranial morphology, over skin tone. Ancient and modern "Caucasoid" populations were thus held to have ranged in complexion from white to dark brown. In the United States, the root term Caucasian has also often been used in a different, societal context as a synonym for "white" or "of European ancestry".

First introduced in early racial typologies and anthropometry, the term denoted one of three purported major races of humankind (Caucasoid, Mongoloid, Negroid). Since the second half of the 20th century physical anthropology has moved away from a typological understanding of human biological diversity towards a genomic and population based perspective, and they have tended to understand race as a social classification of humans based on phenotype and ancestry as well as cultural factors, as the concept is also understood in the social sciences. However, "Caucasian" and "Caucasoid" as a biological classification remains in use in forensic anthropology where it is sometimes used as a way to identify the ancestry of human remains based on interpretations of osteological measurements. 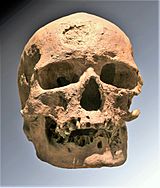 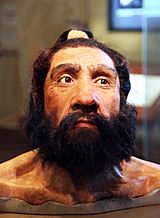 Reconstruction of the head of the Shanidar 1 fossil, a Neanderthal male who lived in Iraq c. 70,000 years ago

Among the earliest anatomically modern human settlements in Europe were established in Kostenki-Borshchevo, Voronezh Oblast in southwestern Russia. Ancient DNA sequencing of a 37,000-year-old male skeleton from the area, Kostenki XIV or Markina Gora, indicates that these early settlers possessed a similar genetic makeup as modern Europeans, but had dark skin and dark eyes. They also possessed slightly more Neanderthal genes than modern populations in Europe and Asia due to interbreeding with Neanderthals over 45,000 years ago. In a study of Cro-Magnon crania, Jantz and Owsley (2003) have noted that these "Upper Paleolithic crania are, for the most part, larger and more generalized versions of recent Europeans."

William Howells (1997) has argued that Cro-Magnons were Caucasoid based on their cranial traits:

... the Cro-Magnons were already racially European, i.e., Caucasoid. This has always been accepted because of the general appearance of the skulls: straight faces, narrow noses, and so forth. It is also possible to test this arithmetically.... Except for Predmosti 4, which is distant from every present and past population, all of these skulls show themselves to be closer to "Europeans" than to other peoples—Mladec and Abri Pataud comfortably so, the other two much more remotely.

Carleton Coon (1962) argued that Caucasoid traits emerged prior to the Cro-Magnons, and were present in the Skhul and Qafzeh hominids. However, these fossils and the Predmost specimen were held to be Neanderthaloid derivatives, as they possessed short cervical vertabrae, lower and narrower pelves, and had some Neanderthal skull traits. Coon further asserted that the Caucasoid race was of dual origin, consisting of early dolichocephalic (e.g. Galley Hill, Combe-Capelle, Teviec) and Neolithic Mediterranean (e.g. Muge, Long Barrow, Corded) Homo sapiens, as well as Neanderthal-influenced brachycephalic Homo sapiens dating to the Mesolithic and Neolithic (e.g. Afalou, Hvellinge, Fjelkinge).

More recent analysis of Cro-Magnon fossils indicates that they had larger skulls than modern populations, and possessed a dolichocephalic (long-headed) and low cranium, with a wide face. It also suggests that some Cro-Magnons may have had brown skin. The very light skin tone found in modern Northern Europeans is a relatively recent phenomenon. It may have appeared in the European line as recently as 6 to 12 thousand years ago, indicating Cro-Magnons had brown skin.

All content from Kiddle encyclopedia articles (including the article images and facts) can be freely used under Attribution-ShareAlike license, unless stated otherwise. Cite this article:
Caucasian race Facts for Kids. Kiddle Encyclopedia.