National Museum of Health and Medicine facts for kids

The National Museum of Health and Medicine (NMHM) is a museum in Silver Spring, Maryland, near Washington, DC. The museum was founded by U.S. Army Surgeon General William A. Hammond as the Army Medical Museum (AMM) in 1862; it became the NMHM in 1989 and relocated to its present site at the Army's Forest Glen Annex in 2011. An element of the Defense Health Agency (DHA), the NMHM is a member of the National Health Sciences Consortium. 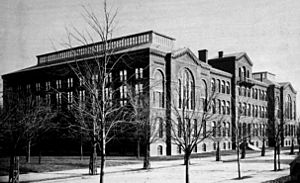 The AMM was established during the American Civil War as a center for the collection of specimens for research in military medicine and surgery. In 1862, Hammond directed medical officers in the field to collect "specimens of morbid anatomy...together with projectiles and foreign bodies removed" and to forward them to the newly founded museum for study. The AMM's first curator, John H. Brinton, visited mid-Atlantic battlefields and solicited contributions from doctors throughout the Union Army. During and after the war, AMM staff took pictures of wounded soldiers showing effects of gunshot wounds as well as results of amputations and other surgical procedures. The information collected was compiled into six volumes of The Medical and Surgical History of the War of the Rebellion, published between 1870 and 1883.

During the late 19th and early 20th centuries, AMM staff engaged in various types of medical research. They pioneered in photomicrographic techniques, established a library and cataloging system which later formed the basis for the National Library of Medicine (NLM), and led the AMM into research on infectious diseases while discovering the cause of yellow fever. They contributed to research on vaccinations for typhoid fever, and during World War I, AMM staff were involved in vaccinations and health education campaigns. 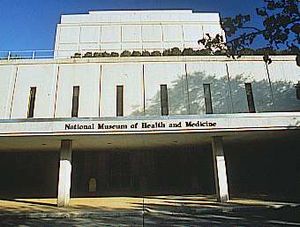 The former NMHM building (actually the basement of the AFIP building) on the Walter Reed Army Medical Center (WRAMC) garrison, Washington, DC, where it was housed from 1971 to 2011.

By World War II, research at the AMM focused increasingly on pathology. In 1946 the AMM became a division of the new Army Institute of Pathology (AIP), which became the Armed Forces Institute of Pathology (AFIP) in 1949. The AMM's library and part of its archives were transferred to the National Library of Medicine when that institution was created in 1956. The AMM itself became the Medical Museum of the AFIP in 1949, the Armed Forces Medical Museum in 1974, and finally the NMHM in 1989. During its peak years on the National Mall in the 1960s, every year the Museum saw "as many as 400,000 to 500,000 people coming through". But after its moves to increasingly obscure and out-of-the-way sites, it fell into a period of relative neglect. By the 1990s, it was attracting only between 40,000 and 50,000 visitors a year.

In 1989, C. Everett Koop (in his last year as Surgeon General) commissioned the "National Museum of Health and Medicine Foundation", a private, nonprofit organization to explore avenues for its future development and revitalization, with the aim of ultimately returning its collection to a venue on the National Mall. Proposed was “a site on land that is located east of and adjacent to the Hubert H. Humphrey Building (100 Independence Avenue, Southwest, in the District of Columbia)”. In 1993, a draft bill authored by Sen. Edward Kennedy proposed $21.8 million for moving the existing collection to a new facility to be constructed on that site. That bill, however, was never introduced owing to political difficulties including objections from Constance Breuer—widow of Marcel Breuer, architect of the Humphrey Building—who objected to the view obstruction that would be entailed by the proposed construction. A letter from the Department of Defense to Koop in the mid-1990s, expressed hope that the NMHM exhibits would "one day be provided the appropriate and prominent home they deserve back at the National Mall in the new National Health Museum". But the DoD backed away from contributing to funding a new museum. The Foundation was superseded by a new organization, dedicated to creating a National Health Museum, which was focused on public health education. Although the effort for a physical museum appears to be defunct, the museum maintains a virtual presence.

Authority over the Forest Glen garrison was transferred from WRAMC to Fort Detrick in October 2008. The NMHM closed its exhibits on April 3, 2011, and reopened in a new building on September 15, 2011. On October 1, 2015, the NMHM became part of the Defense Health Agency.

The NMHM embodies five collections consisting of about 25 million artifacts, including 5,000 skeletal specimens, 8,000 preserved organs, 12,000 items of medical equipment, an archive of historic medical documents, and collections related to neuroanatomy and developmental anatomy. The museum's most famous artifacts relate to President Abraham Lincoln and his assassination on April 14, 1865, by John Wilkes Booth. 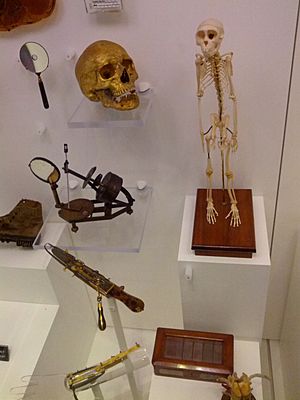 A typical display case at the museum. Clockwise from top right: the skeleton of Able, a rhesus macaque who was among the first primates ever to be sent to space; a box containing the tumor that killed Ulysses S. Grant, sectioned; a hand-cranked surgical saw used for cutting through bone in amputations, etc; and a gilded skull, the first item in the museum's catalogue – original owner unknown.

On display are a copy by sculptor Avarel Fairbanks of Lincoln's life mask and hands made by Leonard Volk in 1860, the bullet fired from the Deringer pistol which ended the President's life, the probe used by the U.S. Army Surgeon General to locate the bullet during autopsy, pieces of Lincoln's hair and skull, and the autopsy surgeon's shirt cuff, stained with Lincoln's blood. In 2010 the heirs of American pathologist Thomas Harvey (1912–2007) transferred all of his holdings constituting the remains of Albert Einstein's brain to the NMHM, including 14 photographs of the whole brain (which is now in fragments) never before revealed to the public. 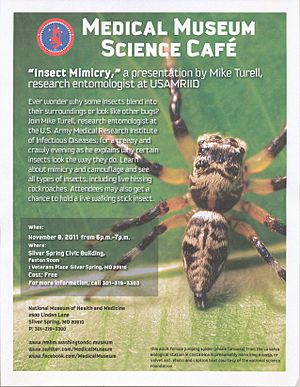 The museum offers a wide variety of programs on weekends, weekdays, and evenings throughout the year for adults and children, with topics ranging through a spectrum of medical, scientific, and historical subjects.

The museum is located at 2500 Linden Lane in Silver Spring, Maryland, one mile outside the District of Columbia. It is open to the public, but security restrictions require a photo ID for all adult visitors. It is open from 10 a.m. to 5:30 p.m. every day except Christmas (when it is closed), and admission is free.

All content from Kiddle encyclopedia articles (including the article images and facts) can be freely used under Attribution-ShareAlike license, unless stated otherwise. Cite this article:
National Museum of Health and Medicine Facts for Kids. Kiddle Encyclopedia.