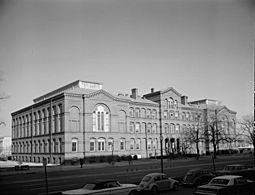 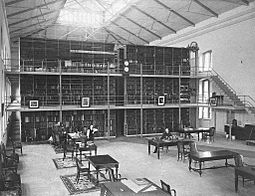 The Army Medical Museum and Library (AMML) of the U.S. Army was a large brick building constructed in 1887 at South B Street (now Independence Avenue) and 7th Street, SW, Washington, D.C., which is directly on the National Mall. It was designated a National Historic Landmark in 1965 and added to the National Register of Historic Places in 1966. The building was demolished in 1969, and the collections at the focus of the landmark designation were dispersed.

The AMML remained on the Mall until the 1960s, when the Museum and Library were moved to their present separate locations. The old building (known affectionately as "Old Red" or "The Old Pickle Factory") was razed and replaced by the Smithsonian's Hirshhorn Museum and Sculpture Garden in 1969.

The AMML collection had its origins in the federal government's decision in 1862, during the American Civil War, to begin a collection of items of medical and surgical interest related to the treatment of Union Army wounded and sick in the war. At first focused on diseases related to the military (a major cause of death and incapacity during that war), it grew over the next two decades to include a wider array of samples for the use of military medical investigators. In 1888 the collection was formally opened to civilian medical researchers as well.

The collection resided in a variety of buildings prior to the construction of the AMML building in 1887, including Ford's Theatre. It remained in the AMML building until October 1968, at which point it was dispersed. Its principal successor is the National Museum of Health and Medicine in Silver Spring, Maryland.

All content from Kiddle encyclopedia articles (including the article images and facts) can be freely used under Attribution-ShareAlike license, unless stated otherwise. Cite this article:
Army Medical Museum and Library Facts for Kids. Kiddle Encyclopedia.