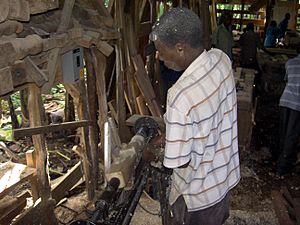 Cabinet making, also spelled cabinetmaking or "cabinet-making" with a hyphen, is the use of fine woodworking skills to make cabinets and furniture.

Cabinetmakers learn to use the tools of the cabinet making trade.

There were few full-time furniture makers in England or America until the last half of the 17th century.

In the 18th century, some European cabinetmakers became well known. Cabinet making was an essential trade in early British North America. It was a huge money maker. They made furniture like cabinets, chairs, doors, drawers, cupboards, bed frames, tables, and many more. They used gimlets, gouges, bow saws, chisels, braces, and hacksaws to make their furniture. The wood they used was oak, maple, cypress, chestnut, and yellow pine.

All content from Kiddle encyclopedia articles (including the article images and facts) can be freely used under Attribution-ShareAlike license, unless stated otherwise. Cite this article:
Cabinet making Facts for Kids. Kiddle Encyclopedia.