Kids Encyclopedia Facts
This page is about pine trees in the United States and United Kingdom. For other uses, see Yellow pine (disambiguation). 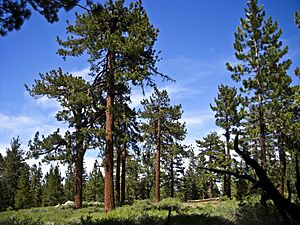 The Jeffrey pine and the ponderosa pine are common in drier montane areas of the Sierra Nevada. They are often confused by casual observers. Across the remainder of the American West, Jeffrey pine is absent, with ponderosa pine being the sole yellow pine.

Ponderosa pine forests occurs on the Colorado Plateau and in the Sierra Nevada of the Western United States, as well as other parts of North America.

One way to distinguish between them is by their cones. Each has barbs at the end of the scales. The sharp Jeffrey pine cone scale barbs point inward, so the cone feels smooth to the palm of one's hand when rubbed down the cone. Ponderosa pine cone scale barbs point outward, so feel sharp and prickly to the palm of one's hands. Another distinguishing characteristic is that the needles of Jeffrey pine are glaucous, less bright green than those of ponderosa pine, and by the stouter, heavier cones with larger seeds and inward-pointing barbs. 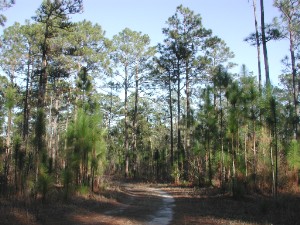 A forest of longleaf pine, one of the varieties of southern yellow pine

In the Southern United States, yellow pines can refer to one of the native species: loblolly, longleaf, shortleaf, or slash pines. These yellow pines grow very well in the acidic red clay soil found in most of the region. The wood from the southern yellow pines typically has a density value between 50 and 55 lb/cu ft (0.80 and 0.88 g/cm3) when pressure treated. Yellow pine grows across the South and Mid-Atlantic regions, from Texas to New Jersey.

Dimensional lumber and plywood products manufactured from southern yellow pine are used extensively in home construction in the United States. They are also used for wooden roller coasters and are most used for utility poles throughout the United States.

Halocarpus biformis, a species of podocarp, is known as yellow pine in New Zealand. It is a tight-grained, sweet-smelling, and extremely durable wood.

All content from Kiddle encyclopedia articles (including the article images and facts) can be freely used under Attribution-ShareAlike license, unless stated otherwise. Cite this article:
Yellow pine Facts for Kids. Kiddle Encyclopedia.